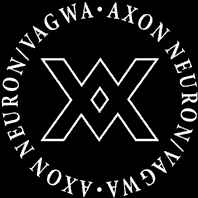 Profil:
Axon Neuron/Vagwa is a German Dark Ambient/Industrial band formed in the mid 1990s. From 1995 to 2000 the project released several albums on cassette tapes and CD-Rs – nowadays much sought after items. From 2002 the line-up featured members of the Neofolk band Aurum Nostrum. Also in 2002 a short collaboration with the French project Nocturne under the alias Europaplan emerged. In 2004 Axon Neuron/Vagwa released their first vinyl mini album "Lohe" via the Berlin based label Eternal Soul Records followed by the double CD retrospective :Documents 1995-2005: on the same label. From 2007 to 2010 Axon Neuron/Vagwa released a series of limited edition CD-Rs called „Archive“ and several 3inch CD-Rs via mailorder. In 2017 Axon Neuron/Vagwa began to made parts of their backcatalogue available for free download via https://soundcloud.com/axon-neuron-vagwa.
Aliasse:
Axon Neuron, Thorn (14), Vagwa
Mitglieder:
Christian Ebel, Claudia Preisler, Enrico Eisert, Marco Szelag
Varianten:
Alle | Axon Neuron / Vagwa
Axon Neuron/Vagwa

20. Juli 2018
Definitively one of the best band in this style, A big work on the sound and the arrangements, realy creative and they never choose the easy way for each productions. A band to have in your collection between LJDLP, Autopsia and Stahlwerk 9.