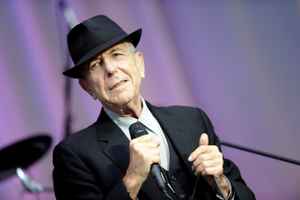 His first collection of poetry, Let Us Compare Mythologies, was published in 1956, followed by The Spice Box of Earth in 1961. After traveling throughout Europe, he settled on the Greek island of Hydra, where he stayed for seven years. There he wrote another collection of poetry, Flowers for Hitler (1964), and two novels, The Favorite Game (1963) and Beautiful Losers (1966). In 1967, Cohen moved to the United States to pursue a career as a folk musician. In 1994, Cohen retreated to the Mt. Baldy Zen Center near Los Angeles, beginning what became five years of seclusion at the center. In 1996, Cohen was ordained as a Rinzai Zen Buddhist monk and took the Dharma name "Jikan", meaning "silence".

During his lifetime he recorded 14 studio albums. A tribute album with 18 songs was released in 1991, featuring R.E.M., John Cale, Nick Cave, Ian McCulloch, Pixies, The House Of Love and Lloyd Cole among others. John Cale's cover of the song "Hallelujah" on this album served as the basis for the version released by Jeff Buckley in 1994.

In high school (2000) a girl I knew went to Canada and came back to tell me about how everyone listened to Leonard Cohen, and that I would really like his music. I bought the Best of, and song by song, he taught me something, things that made him a hero to me, and also some real "yechhh what were you thinking" moments with his work later on. When I bought albums, and didn't like them at all, it really messed me up. I am very glad I got to see him live in 2010 or so--he skipped around, sang for two hours, hit some of those Young-Cohen high notes during "Bird on the Wire," and I felt total kinship with a crowd of elderly people with ponytails. With his work, it's the same complexity as a relative. Home wouldn't feel like it does, wherever it happens to be...

I ran into the graveyard where he lay, but there was no time, I couldn't find him. In Montreal, his face graces a whole side of a skyscraper--and you know what, I'm glad, they put old-age Cohen up there. They didn't chase after his early glamor shots.

...tomorrow is Cohen's birthday, so buy up!

21. August 2021
3 comments? I know this is largely for dance people, but come on! LenCo is most probably the greatest songwriter ever. And such great humour too. Blows me away every time.

16. Februar 2019
He was his truest self. He didn't seem to really give much of a crap about success, or fame or any of the trappings. He just did what he did and if you liked it, great. His volume of output is a little small by comparison to performers with a similar durability and span of years to their career. That said, his volume of really good stuff holds up pretty well. And he was very good at the end of his life. He stuck it out.

11. November 2016
Certainly.. I was a late bloomer on Cohen, Heard the song "Waiting For A Miracle" years ago when i saw Natural Born Killers for the first time. That really opened me up to Cohen´s dark world a bit, but it has been a hard trek for me as i take it step by step from time to time. But he was equally as much a poet than a singer in my eyes, and lyrically he has inspired musician everywhere. But ultimately, to me, it´s the lyrics that grabs me when we talk about Cohen, and at the same time, he kinda share the throne of darkness with Johnny Cash.
But he was great. True gentleman, lyricist and a songwriter. Not many of those around anymore is it?
Rest in peace Cohen..

May I be the first to point out there are absolutely no comments about Leonard prior to his death, but now that he is dead here is your chance to say how great he was, probably a bit late but anyway praise away.