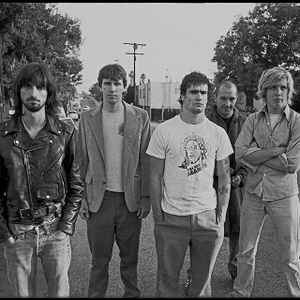 Profil:
Black Flag was one of America's first hardcore punk bands. They emerged from Southern California to gain international prominence, touring enough to become a major attraction in virtually every city where a scene existed and undoubtedly inspiring others to get in the game. Via the band's SST label, Black Flag played an essential role in the development and popularization of American punk. Through countless revolving-door personnel changes — which spawned numerous spin-off bands along the way — Black Flag persevered until 1986, finally dissolving after locating and exploring the zone where punk and heavy metal intersect and overlap.

18. September 2020
When Chavo quit in the midst of BF's set he threw down the mike, jumped
offstage, and for a while no one knew what to do. Neither did the band.
Imagine: hundreds of edgy, uncertain punks ready to use any excuse to create
mass violence; the remaining members of BF sitting dumbfounded onstage: I was
about ready to grab the mike and tell everyone to "Go Home." Greg told me:
"no, we're going to play." They resumed playing. Some young kid jumped
onstage, grabbed the mike and started singing "Nervous Breakdown" All
hell broke loose. A couple of other kids jumped onstage and started fighting
over the mike. A guy named "Snikers" (ex-lead singer for the "Simpletones")
jumped up and began singing "Louie Louie" and then proceeded to perform a most
disgustingly drunken striptease during which cans, bottles, spit, sweat, and
bodies began flying with a vengeance. It was the finest rock & roll show I had
ever seen.

The ensuing Black Flag shows were just as inspiring. Considering the fact that
they had no vocalist, anything was bound to happen. "Guest" vocalists took the
stage and many of these people bragged up and down the west coast how they were
Black Flag's " new singer."

28. Mai 2020
Chuck on the late 80s/early 90s colored vinyl editons:
Hanson: Rainbo Records pressed your clear yellow and red vinyl versions of the Nervous Breakdown EP 001. The last time we spoke, you told me that they were pressed in 1990 or 1991. The info in the “Runout” dead wax area of the record has “R-12806 / R-12807” which, per Rainbo Records, would suggest that they were all pressed at the same time in 1989. Yet the Yellow vinyl version has the red sleeve suggesting that it was released before the Red vinyl versions. Was the yellow vinyl version released in 1989 and then the Red vinyl versions were released a year or two later? Or were they ALL released at the same time in 1989 just with different sleeves?

Chuck: Colored Vinyl editions did not happen until 1990, but maybe some of the production work was 1989. It was something we thought would be a good idea to generate traffic between us and our 600 or so direct retail customers and they with their customers. We came out with a series of several colored vinyl editions around that time. We requested random colors from Rainbo so we had no idea what they’d deliver until we got them. They just threw our plates on the machines and ran out the vinyl they had in the press from other people’s runs. The stampers have all of that run out info you are talking about and those only change when they wear out every so often. So any editions of the title in question would have the same information for several years. During that time we also used up odd stock on covers, labels and sleeves. For instance, the red sleeves without the UPC were used for the yellow vinyl version and then the red vinyl versions got the new blue ink sleeve with the UPC. So the colored vinyl editions are real oddballs.