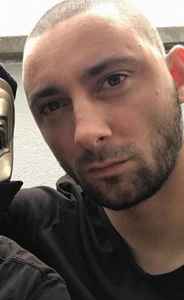 Bürgerl. Name:
William Emmanuel Bevan
Profil:
Electronic recording artist from London. His music contains elements of future garage, dubstep, 2-step garage, ambient and jungle music. His eponymous debut album was released in 2006 to critical acclaim. The Wire magazine named it their album of the year, along with achieving fifth place in the Mixmag 2006 Album of the Year list, and eighteenth in the best of the year list of The Observer Music Monthly supplement. Burial's second album, Untrue, was also released to critical acclaim and was the second-highest rated album of 2007, according to the review-collating website, Metacritic. After that Burial has released a steady string of acclaimed long-form singles and EPs.
Seiten:
Bandcamp, hyperdub.net, SoundCloud, Twitter, MySpace, hyperdub.net, Wikipedia, whosampled.com
Aliasse:
William Bevan

27. Juli 2022
Crappy music aka underground music.
Minimal, repetitive, boring, depressing, trash music, that only negative people can understand (underground music lovers).
Not for the mainstream EDM lovers, so not for me.
1 Antwort anzeigen

IMHO Burial is way superior to Massive Attack - Burial forged a completely unique sound that can't be replicated by anyone else. Like the best classical music which I listen to more and more as I grow older you can never overplay Burial's creations.They always retain the original magic and enchantment you felt the very first time you heard them.

Burial's music is unique - it has the power to take me back to walking or driving through a melancholy night time London. He restored my faith in popular music,

6. Dezember 2020
Why is Burial's "Old Tape" track not listed here? Unfortunately i cant submit anything at the moment.. So feel free to add this track :)
2 Antworten anzeigen

10. Dezember 2019
One of the dopest trip hop artist of all time in the same league as Massive Attack! His first album release was quite of a rollercoaster ride into a new genre <3
1 Antwort anzeigen

20. Oktober 2019
His music reminds me of dreams and nightmares I've had that I can't remember.
2 Antworten anzeigen