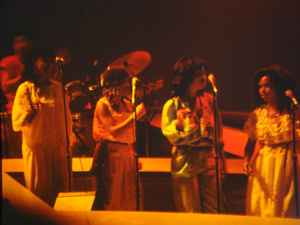 Profil:
Wonderlove were Stevie Wonder's female backup vocalists. They feature on many of his 1970s recordings, a notable example being “Signed, Sealed, Delivered, I’m Yours”. Wonderlove often opened Stevie’s live shows with their own songs and then performed alongside him. The lineup often changed throughout the years but the most notable lineup consisted of Lynn Davis, Alex Brown, Susaye Green, and Windy Barnes in the early 1980s. This lineup assembled in 1981 after the release his album Hotter Than July and toured with Wonder on his "Hotter than July Tour". The same lineup also recorded on his soundtrack album The Woman In Red (Selections From The Original Motion Picture Soundtrack) and once again joined him on the tour that followed before leaving Wonder's band in 1986. They were replaced by new members.
Seiten:
marvellousmotown.com
Mitglieder:
Alex Brown, Deniece Williams, Lynn Davis, Susaye Greene, Windy Barnes
Varianten:
Alle werden angezeigt | Wonderlove
Wonder Love