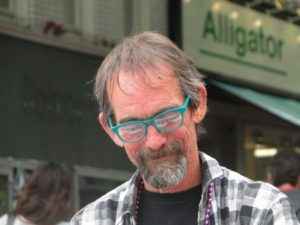 Parnell started showing a serious interest in music at age five and was heavily influenced by jazz as a teenager. He sought out Ellis Marsalis to further his musical education which led to studies at Berklee College of Music in Boston. After returning to New Orleans he began working with some older trad masters and soon found himself accompanying many of New Orleans' extraordinary musicians, playing funk, r&b, latin, rock and trad, working in the countless dance halls, bars, steamboats playing concerts, festivals, and gigs in the crescent city and around the world.

Via Musicians for Music (New Orleans, Louisiana, USA) he received a grant for composition from the National Endowment of the Arts.

Residing in London, UK, he had been performing in various venues and on recording sessions with a number of bands in London, as well as composing and recording his own music and doing workshops for kids and special adults.
Seiten:
philparnell.com, MySpace
Gruppen:
Neslort, Phil Parnell 3
Varianten:
Alle werden angezeigt | Phil Parnell
P Parnell, P. Parnell, P.Parnell, Parnell, Phil Parnel