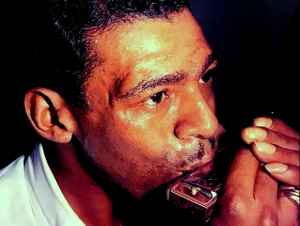 Bürgerl. Name:
Marion Walter Jacobs
Profil:
Blues harmonica player and composer.
His innovation on the harmonica has had impact on succeeding generations.
Born & raised in Louisiana, Little Walter had quit school by the age of 12, & was supporting himself with odd jobs & busking around southern cities in Louisiana, Arkansas, Tennessee, & Missouri. Arriving in Chicago in 1945, he occasionally found work as a guitarist but garnered more attention for his already highly developed harmonica work. Jacobs, growing frustrated with having his harmonica drowned out by electric guitarists, competed with their volume by adopting the previously little-used method of amplification. However, he differed from his contemporaries by purposely pushing his amplifiers beyond their intended technical limitations, using the amplification to explore and develop radical new timbres and sonic effects previously unheard from a harmonica, or any other instrument. It has been said Little Walter was the first musician of any kind to purposely use electronic distortion.
His first released recordings were in 1947. He then joined Muddy Waters band playing mostly unamplified harmonica from 1948 to 1952, though Chess hired Walter to play on most of Muddy's records throughout the 50's.
In 1952 his instrumental hit "Juke" spent 8 weeks atop the Billboard R&B chart, the only harmonica instrumental #1 to date.
Little Walter scored fourteen top-ten hits on the Billboard R&B charts between 1952 and 1958, including a second #1, "My Babe" in 1955, a level of commercial success never achieved by his former boss Waters.
In the late 1950s, Jacob's fame and fortunes began to decline. He suffered from alcoholism and had a notoriously short temper. He died in his sleep at the apartment of a girlfriend at 209 E. 54th St. in Chicago early in the morning following a fight outside a club he was playing at in South Chicago.
Described as "king of all post-war blues harpists", he is widely credited by blues historians as the artist primarily responsible for establishing the standard vocabulary for modern blues & blues rock harmonica players.
Inducted into Rock And Roll Hall of Fame in 2008 (Sidemen).
Born 1 May 1930 in Marksville, Louisiana.
Died 15 February 1968 in Chicago, Illinois.
Seiten:
Wikipedia, rockhall.com, dianasegara.com, britannica.com, allmusic.com, littlewalterfoundation.org
Aliasse:
Walter Jacobs
Gruppen:
Little Walter & His Jukes, Little Walter And His Combo, Little Walter And The Night Cats, Little Walter Trio
Varianten:
Alle werden angezeigt | Little Walter
"Little" Walter Jacobs, 'Little Walter' Jacobs, Dixon, Jacobs, L. Walter, Litte Walter, Little Ealter, Little Walker, Little Walter (Jacobs), Little Walter J, Little Walter J., Little Walter Jacobs, Little Walter Juke, Little Walters, Little Walther, Little Water Juke, Walker, Walter, Walter Jacobs, Walters

30. Oktober 2016
Where is the listing for the original 1955 release of My Babe?
Antworten Mich bei Antworten benachrichtigen Helpful

Hail the King //:+)
As a fan of harmonica, blues, & music in general, Little Walter is a King.
His playing has never been truly equaled on the harmonica. A true innovator, not unlike Jimi Hendrix was on guitar..
His 2008 entry into the Rock'N''Roll hall of fame as a sideman should be as a bandleader also. With his first-take debut single, 1952's "Juke", the first and only harmonica solo single to be #1 on the Billboard R&B charts (#1 for 8 weeks!), he is deserving enough. Add to that Jacobs 14 top-ten Billboard R&B hits between '52 & '58 also included the #1 charting blues-standard "My Babe". Also, his early explorations in the 1940's with amplification, quite likely the first musician to purposely use distortion, add to his stature. It seems his earliest classic recordings with Muddy Waters somehow have overshadowed the full breadth of his recorded genius. This being said,
perhaps the only thing overlooking this genius may be the Hall-of-Fame agenda.