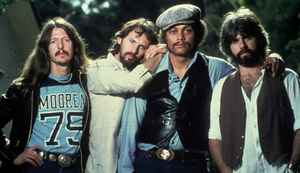 29. November 2009
The story of the Doobie Brothers begins with Skip Spence, the one-time boss of "Moby Grape". Around 1969 he piloted drummer John Hartman to the American West Coast.
Guitarist Tom Johnston had played in a California jazz-rock formation called "The Flash" before he pulled out of the ego-trips of leader David Anderson.
Tom Johnston and John Hartman formed a trio with bassist Greg Murphy and appeared in California as "Plug". Greg Murphy left being replaced by Dave Shogren and during this period they changed their musical concept several times from hard rock to gospel rock with horns and back to hard rock again.
When former folk guitarist Pat Simmons joined up, the quartet moved into an old house on 12th street in San Jose's student ghetto and hippie enclave.
When passing around a joint at the breakfast table they realized all of them being "Doobie Brothers" and finally chose this to be their band name.
It was Skip Spence again who took a tape of the group to Warner Brothers and helped them get a recording contract.
In 1971 Tom Johnston (guitar, piano, harp and vocals), Pat Simmons (guitar, vocals), Dave Shoegren (bass, organ, vocals) and John Hartman (drums) recorded their first album, reflecting their varied musical background, melodic rock with blues fragments, sometimes acoustic, sometimes electric, down-to-earth contents in tough sound.
It most surprisingly became a big success, but Dave Shoegren departed soon afterwards and was replaced by Tiran Porter and Mike Hussack (percussion). As a quintet with two guitars and two drummers/percussionists they were drawing a lot of comparisons to The Allman Brothers (Band), though the Doobie Brothers had more in common with Moby Grape.
"Toulouse Street" was their second album and released in 1973, quickly awarding gold in the US, featuring the all-time classic "Listen To The Music".
"Toulouse Street" has a definite hard rock appeal and is also notable for the use of horns on some tracks, marking the musical progression of the group.
In 1974 the Doobie Brothers made their concert debut in Britain and recorded two albums, "The Captain And Me" and "What Were Once Vices Are Now Habits".
"The Captain And Me" includes another big hit "Long Train Running" and was commercially as succesful as the "Toulouse Street" album.
Their fourth album "What Were Once Vices Are Now Habits" for the first time features "The Memphis Horns" brass section who would become firm associates with the band on their records and concerts.
At the end of 1974 Jeff 'Skunk' Baxter of Steely Dan joined the band on slide guitar and by 1975 more personnel changes happened.
Mike Hussack left and was replaced by Keith Knudsen, former band member of LEE MICHAELS, while Tom Johnston was forced to retire for a year due to serious health problems. His place was taken by another former STEELY DAN member, Michael McDonald. The DOOBIE BROTHERS recorded their fifth album "Stampede" in 1975 and saw the return of Tom Johnston a year a later and continued as a seven-piece with the release of their 6th album "Takin' It To The Streets" in 1976.
Three more studio albums followed incl. top hit "What A Fool Believes" in 1978. They finally split up in 1982 and a double album of their farewell tour was released -like all others on Warner- in 1983.
The first five albums are milestones of the classic rock age and rank the Doobies somewhere between The Allman Brothers and Little Feat.