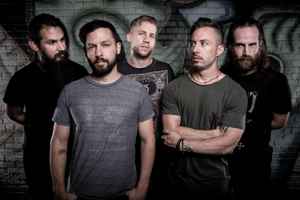 Profil:
American mathcore band formed in 1997 and based in Morris Plains, New Jersey.

The Dillinger Escape Plan merged new-school hardcore, progressive metal and free-jazz. The band was formed in March 1997 in North New Jersey (USA) by guitarist Benjamin Weinman, bassist Adam Doll, vocalist Dimitri Minakakis and drummer Chris Pennie. The band has gone through multiple lineup changes, with Weinman being the only constant member of the band. In August 2016, they announced that they would be breaking up following the tour cycle of their 6th full-length album "Dissociation". Their final show took place at Terminal 5 in New York City on December 29, 2017.