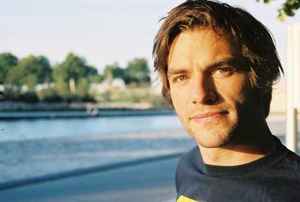 Bürgerl. Name:
Phil Stumpf
Profil:
Phil Stumpf (born 1973 in Germany) has been a musician since 1993 and part of several bands and projects. Having evolved from indie rock in the 80's / early 90's he soon got fascinated and insprired by bands like Mouse On Mars and Tortoise, electronic music and its minimal structures. Mostly through the work with his band oh. he "arrived" at the dancefloor, discovered the minimal groove and started to produce club tracks under his own name as well as under Duplex 100 in collaboration with his French partner Sam Rouanet in 1999. In 2001 he moved to Paris and founded the "Minimal Dancin" clubnight at the Nouveau Casino together with Sam Rouanet. He is also part of Canvas, an electronic jazz band from Paris with Sam Rouanet and James Sindatry.
Seiten:
phil-stumpf.com
Gruppen:
Canvas, Duplex 100, oh., The Seasons
Varianten:
Alle werden angezeigt | Phil Stumpf | Dr. Phil Stumpf
P. Stumpf