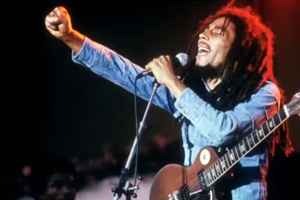 26. März 2020
I can't make any sense of this list of albums, how come they start so late in his life, and have so little mention of Island?
1 Antwort anzeigen

7. Februar 2019
Bob Marley was the true inspirational reggae genius of Jamaica everywhere, in general. And in an interview in New Zealand in 1979, he said: "the alcohol just make you drunk, it doesn't let you meditate", and other things like: "the music comes from masses out of people" (he said it on an interview before his death).

2. April 2018
A man who could of changed the world if he was still alive right now, but still managed to do so through his music. A spiritual herb smoking rastafarian musician & activist who left his poetry behind for the future generations to hear. Growing up struggling with less support from his Marley relatives it pushed him to become a global name performing all over the world.