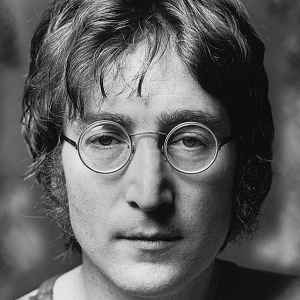 Bürgerl. Name:
John Winston Ono Lennon
Profil:
Songwriter, rock singer and guitar player, best known for his work with The Beatles during the 1960s and 1970s. Inducted into Songwriters Hall of Fame in 1987. Inducted into Rock And Roll Hall Of Fame in 1994 (Performer).

John Winston Ono Lennon (MBE, gave it back) was an English singer, songwriter, and peace activist, who gained worldwide fame as the founder, co-lead vocalist, and rhythm guitarist of the Beatles. His songwriting partnership with Paul McCartney remains the most successful in musical history. In 1969, he started the Plastic Ono Band with his second wife, Yoko Ono (parents of Sean Lennon). After the Beatles disbanded in 1970, Lennon continued as a solo artist and as Ono's collaborator.

Born in Liverpool, Lennon became involved in the skiffle craze as a teenager. In 1956, he formed his first band, The Quarrymen, which evolved into the Beatles in 1960. He was initially the group's de facto leader, a role gradually ceded to McCartney. Lennon was characterized for the rebellious nature and acerbic wit in his music, writing, drawings, on film and in interviews. In 1957 Lennon meets his first wife Cynthia Lennon at the Liverpool College of Art and then married her on the 23rd of August, 1962. On the 8th of April, 1963, Cynthia gave birth to Lennon's first son, Julian Lennon. In the mid-1960s, he had two books published: In His Own Write and A Spaniard in the Works, both collections of nonsensical writings and line drawings. Starting with 1967s All You Need Is Love, his songs were adopted as anthems by the anti-war movement and the larger counterculture.

7. März 2022
These transcriptions are a mess. They should be listed as "Miscellaneous" not as "Albums".
And the Nilsson-Album is just produced by John Lennon and also wrong in the list.
Antworten Mich bei Antworten benachrichtigen 1 Helpful

19. Oktober 2020
Any review of the Lennon Legend Vinyl from 1997. Is it a good pressing does anyone know?
Antworten  1 Antwort anzeigen Mich bei Antworten benachrichtigen Helpful

19. März 2020
Why is Walls and Bridges out of order it came out in 1974 but is in the 2000s
Antworten Mich bei Antworten benachrichtigen Helpful

14. Juni 2018
Why isn't the 1972 release of "Happy Xmas (War Is Over)" featured in this list?
Antworten  1 Antwort anzeigen Mich bei Antworten benachrichtigen Helpful

23. Dezember 2016
Without question, John Lennon gave us some of the most enduring music of the previous century, yet everything he wrote appears destined for perpetual scrutiny. He left behind a massive catalog of some of the finest songs the idiom has to offer -- the bulk of which are acutely personal in nature. For the first half of the 1970s, Lennon was the angry and, at times, self-righteous protestor of everything from the war in Vietnam to getting out of bed. Songs such as "Give Peace a Chance," "Power to the People" and "Working Class Hero" -- powerful slogans and scathing indictments in their day -- have lost much of their bite, primarily due to their disturbing and perverse use in ad campaigns, something that would surely make Lennon purple with rage. The remainder of his solo output has a tendency to be spotty, but there are certainly some unmatched heights, from his perennial rocker "Cold Turkey" and signature song "Instant Karma! (We All Shine On)" to the tonsil-shredding masterpiece "Mother" and his pure pop comeback "(Just Like) Starting Over." With his trademark reverb-heavy vocals, the unapologetic exposure of his beleaguered emotions, and a lifelong fascination with the Chuck Berry riffs that initially inspired him, John Lennon gladly offered the world...
... ringside seats to the overhauling of his psyche and, for a time, acted as an outspoken, prickly conscience to us all. His unfathomable murder in 1980 remains one of the most mourned losses in the history of rock 'n' roll. Imagine is considered by many as the best song ever written, other personal favourites would have to be woman and jealous guy.
For me, he sits alongside Ian Curtis, Bob Dylan, Joe Strummer and Paul Weller as one of the best lyricists (is that even a word?) i have ever heard R.I.P. John
Antworten  2 Antworten anzeigen Mich bei Antworten benachrichtigen 6 Helpful