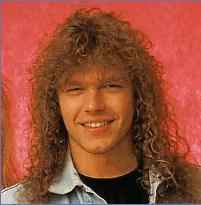 Schwichtenberg was ejected from the band in 1993 during the tour of the album Chameleon. The dismissal was reportedly due to Ingo's dependence on alcohol and drugs (most notably cocaine and hashish). Ingo also suffered from schizophrenia, and his refusal to take his medication would lead to bizarre episodes such as uncontrollable sobbing, which made it impossible for him to take the stage. Schwichtenberg was apparently somewhat dissatisfied with the direction of the band as well, and especially did not care for the song Windmill (to which he referred to as "Shitmill" according to band member Michael Weikath) from the Chameleon album.

After his ejection from the band, Schwichtenberg slid further and further into his schizophrenic episodes, culminating in his suicide in 1995, by jumping in front of a subway train. Schwichtenberg's replacement in the band was Uli Kusch.
Seiten:
Wikipedia, MySpace
Gruppen:
Helloween
Varianten:
Alle werden angezeigt | Ingo Schwichtenberg
I. Schwichtenberg, Ingo, Ingo Schwietenberg