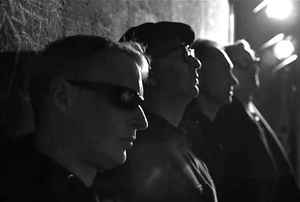 Profil:
Saafi Brothers walk a deep line between trippy vibes and blissed out beats. The origins of Saafi Brothers are long and storied, their brand of smoky, world-weary ambientdub first arising from the Blue Room label. They are formed in the spirit of chillout & dub, and they have a mystical connection when placing with their audience into higher spheres.

Soul wrenching deep ambient tunes are layered gently into tranced and bassy beats. Saafi Brothers' debut "Mystic Cigarettes" came out in 1997 on the british label Blue Room Released. With the today classic psydub album, the project consisting of Frankfurt/Germany based producers Gabriel Le Mar, Groovetitan and Michael Kohlbecker, immediately placed itself among the artists of the electronic ambient scene.

The Saafis returned to the studio in 2000, delivered their second longplayer on Blue Room/UK, "Midnight’s Children". The album represented another perfect demonstration of the Saafi-style made up of the will to experiment and get deep into low-down dub and beats, that get the tunes rocking.

Their third album "Liquid Beach" followed that way even with more danceable elements and boasting a soundtrack of trance, dub, downtempo, dance and sun-kissed psychedelics.

They were part of the cultstatus titled german TV-show SpaceNight and are asked for remixes for other artists, among them are reggae legend Bob Marley, leading german hip hop group Die Fantastischen Vier or british new wave poetress Anne Clark. With their fourth album - "Supernatural" - the brothers made a strong musical relationship and combines electronic sounds from ambient to dub with lucid soundscapes and blissful themes.

Originally released digitally on Iboga Records in 2014, "Live on the Roadblog" is the 5th full-length by Saafi Brothers. Sleepless-faced on music Saafi Brothers digged deep into a series of "live recording sessions", rediscovering the emotional depth of "real-time created music" after a couple of live shows that fueled the idea of creating an entirely live recorded album. The crossing line in this axis is the storytelling aspect that is reflected in the directional lyrics, based on poems by George DIN. "Live on the Roadblog" has the power to touch our souls and is underpinned with a deep message. It’s all about the journey and setting off, being on the road and getting ready for the experiences and deepness that lie ahead. The CD includes a gorgeous 8-page "travelogue"-style booklet designed by Simon Ghahary, released on Carpe Sonum Novum.

Their 6th album „The Quality of Being One“ goes deep into soul turning ambient-dub and adds drum thrills that get the tunes rocking. The secret of their "danceable speed" in ambient tracks is a higher density of their unique ambient-electro sounds and rhythms to experience feelings through their deeply emotive music. Starting with deep intros and then merging atmospheric filterworks into dubbish beats for the floor that can be specially experienced in their live performances.

With „The Quality of Being One“ the Saafi Brothers take another really strong view into experiencing the mystical oneness to be in unity and brotherhood we could live in.