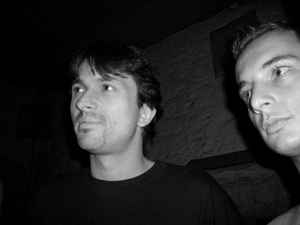 Bürgerl. Name:
Holger Flinsch & Martin Müller
Profil:
They got in contact through a remix album on Martin's label Rotary-Cocktail and realized that they share many musical plains. First no thought was spent on producing an album, but since they had many session in their studio, the whole work got so massive and solid that taking the steps towards an album was just a matter of time.
Holger Flinsch, well-known for his releases on many labels and in particular on 'Choke', has already released a whole bunch of music. The first releases came out in 1999 on the already mentioned legendary label 'Choke'. Later, after he took the chance to produce music for other labels in the Frankfurt microcosm, he founded his own record label 'Basalt'. His last album, the fourth in total, came out on realaudio.ch, a befriended netlabel.
Seiten:
MySpace
Mitglieder:
Holger Flinsch, Martin Müller (2)