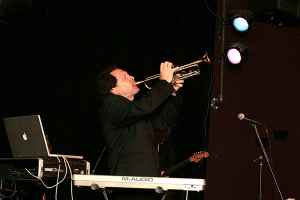 Bürgerl. Name:
Mark Isham
Profil:
Mark Isham (b. September 7, 1951, in New York) is an American trumpeter, synthesist and Academy Award-nominated composer. He works in a variety of genres, including jazz, electronic and film music.

An absolute genius of an artist, who has slowly slipped from the dizzying heights of his most prolific period (1978-1988), where he utilised various synths, combined them with a jazzy nature via his trademark flugel-horn sound through soundtracks and the notable collaborations with other artists such as David Sylvian and Art Lande, then strangely seemed to give up with this truly amazing sound to score films such as Racing Stripes and Bill And Ted 3. The mind baffles. I'd normally hold back on this type of critique, but he seems to have become lost in his Scientology and ignorance. Numerous attempts to advise reissues and other various matters with the fact he was charging around £50 for a 6-track vinyl LP (Cover Art), with no reply purely explains itself. A shame.