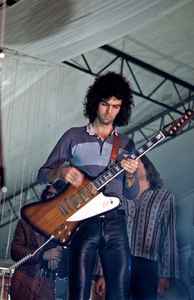 Profil:
UK guitarist who replaced John Weider in Johnny Kidd & The Pirates in 1965. Variously known as 'Morsehead', 'Morshead', 'Jon Moorhead', John Moorshead then joined the seminal but short-lived Shotgun Express with Rod Stewart. He then resided in Julien Covey & The Machine with ex Pirates bandmate Johnny Spence, before joining The Aynsley Dunbar Retaliation.

Moorshead recorded five albums with the band until Dunbar then decided to form Blue Whale. Moorshead went his own way to become a founder of Heavy Jelly (3), along with Jackie Lomax from Merseyside's "Undertakers" and Barry Jenkins from "The Animals". His association in Dunbar's band with Vic Brox and Alex Dmochowski was then renewed on the Graham Bond - Holy Magick album.