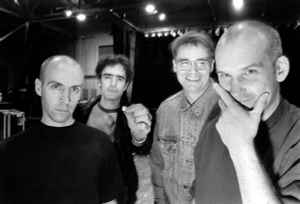 Profil:
Fugazi is an American punk rock band that formed in Washington, D.C. in 1987. The band consists of guitarists and vocalists Ian MacKaye and Guy Picciotto, bassist Joe Lally and drummer Brendan Canty. They are noted for their DIY ethic, manner of business practice, and contempt towards the music industry.
Fugazi have performed numerous worldwide tours, produced six studio albums, a film and a comprehensive live series, gaining the band critical acclaim and success around the world. The band has been on an indefinite break since 2003.
Seiten:
dischord.com, Wikipedia, Bandcamp
Mitglieder:
Brendan Canty, Colin Sears, Guy Picciotto, Ian MacKaye, Joe Lally

19. April 2022
please come back, fugazi. the world needs you. especially with how messed up everything is now.

20. Februar 2021
Fugazi put an end to the debate (that went in parallel with rock's and punk's history) that you can be succesful in you own way and show absolute dignity along with this "success"//

28. Dezember 2020
Honestly surprised that we’ve never seen any physical release of the Albini demos for In On The Kill Taker. I keep checking every now and then to see if they’ve been pressed to wax (officially or otherwise). You would think given the historical interest it’d have happened by now, and I have a hard time believing that notorious archivists like the Dischord crew / Albini haven’t held on to the master tapes..
3 Antworten anzeigen

15. Oktober 2020
Fugazi is such great band, should be more appreciated by fans of alternative rock. I rank them up there with sonic youth, dinosaur jr and pixies as the pioneers of indie noise rock.