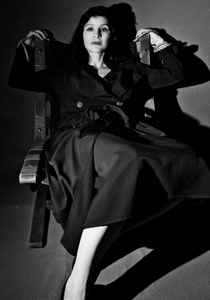 Bürgerl. Name:
Hanin Elias
Profil:
As a member of the German punk electronica dissenters Atari Teenage Riot, riot grrrl Hanin Elias is her own woman. Born in Wittlich, Germany in 1972, Hanins' medicine practicing father moved the family to Syria where she spent her early childhood years. It was during her teens when her parents moved to Berlin that Hanin naturally rebelled and discovered music. She got involved with the punk scene, then switched over to rockabilly before making her face in the goth cliques. Intolerable of social mainstreams, she eventually began searching for another outlet by the end of 1980s. In 1991 she met Alec Empire, who she would later collaborate with in Atari Teenage Riot and also build the roots for Digital Hardcore Recordings (DHR). Hanin founded Fatal Recordings (which in reality was just occasionally a Fatal logo that appeared on certain Digital Hardcore Recordings (DHR) releases) in the late '90s in order for her to plug specific musical styles and identities that she was interested in. Tired of corporate rock and male dominated electronica, she made Fatal a prime outlet for showcasing independent female talent. She signed the English punk girl band Lolita Storm in 1999, as well as issuing her own debut solo album, In Flames, on Fatal/Digital Hardcore in mid-'00.
Seiten:
haninelias.com, fatal-recordings.com, MySpace, Facebook, Wikipedia
Gruppen:
Atari Teenage Riot, Fantôme (3), Pigface
Varianten:
Alle werden angezeigt | Hanin Elias
Elias, H Elias, H. Elias, H.Elias, Hanin, Hanin Elias (Atarli Teenage Riot), Hannin Elias, MC Hanin Elias

10. Mai 2003
In flames is an amazing piece of work, a must listen!
unlike the new and far too flacid "no games, no fun"
no riot left in this girrl worth spending you money on.