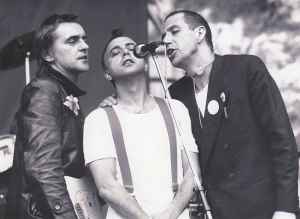 Profil:
German minimalist pop trio from 1980 to 1985, they gained worldwide reputation for their song 'Da Da Da' which was a hit in more than 30 countries. The group was Stephan Remmler (vocals), Gert 'Kralle' Krawinkel (guitar) and Peter Behrens (drums). They released three albums and one live album (on cassette only, later rereleased on CD).

20. September 2010
Trio is an sad example like the wish for international success can destroy a realy great band.
The original german release of the selftiteled album is one of the best minimalist Rock'n Roll, (Post)Punk music i ever heard.
The drummer reduced his set to snare and bassdrum, the guitarist removed 2 of 3 pick-ups on his guitar and the singer reduced his lyrics to a few simple phrases with those three-word-refrains which where sung through a "throat microphone".