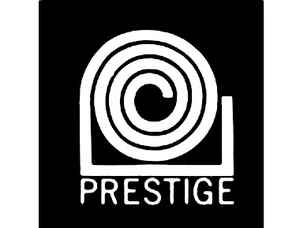 Profil:
US jazz label.
Label Code: LC 0313 .
For the company, see Prestige Records Inc.
For unofficial releases, see Prestige (4).
Like several other prominent jazz producers of the Fifties, Bob Weinstock started out as a traditional jazz fan but soon found himself standing at the cutting edge of modern jazz. He launched his own label – originally called New Jazz, soon renamed Prestige – in 1949 and, during the next decade, recorded such giants as Gene Ammons, Sonny Stitt, Miles Davis, Sonny Rollins, Eric Dolphy, Thelonious Monk, the Modern Jazz Quartet and John Coltrane, often in informal "blowing" sessions.

Weinstock turned the reins over to other producers in 1958, and Prestige soon became the leading purveyor of what is now known as acid jazz with its recordings of Jack McDuff, Richard "Groove" Holmes, Charles Earland, and others.

Prestige, its sub labels and its publishing company, Prestige Music, Inc., became part of the Fantasy group of labels in June 1971, Weinstock remaining President. The Fantasy group merged with the Concord Music Group in 2004.

From 7142 up to (approximately) 7325, the fireworks labels in yellow/black for mono, and black/silver for stereo, show the following:
203 South Washington Ave., Bergenfield, N.J.

All mono 'fireworks' pressings have a caption on the right hand side of the spindle hole that can read any of the following:
"HI FI" / "HI FIDELITY" / "HIGH FIDELITY" / "High Fidelity".

In 1964, a completely different design, known as the 'trident' label was introduced:

1964
Black label, Silver print, Trident 12 'o' clock, Stereo.
No label adress.
Some titles originally released, and some titles reissued, with this transitional label design.
From (approximately) 7310 up to (approximately) 7336 but most titles up to 7325 still released with the older fireworks design and many titles up to 7336 with the trident at 3 'o' clock blue label.

----------------
Prestige in France:
from the fifties to the eighties, license and distribution by different labels: