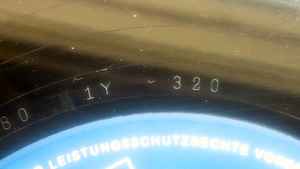 Profil:
German manufacturing and distribution company. Operating under this name from January 1973 until February 1978.

Operated a vinyl mastering / pressing and cassette duplication plant in Hannover (Werk I - Podbielskistrasse) and a second 7" vinyl manufacturing plant in Langenhagen (Werk II - Klusriede). Werk I pressed all 10" and 12" records, while Werk II mastered all records and injection moulded all 7" records.

Phonodisc GmbH vinyl cuttings have a 320 (or 3 20) in the matrix.
Please use Lacquer Cut At - Phonodisc GmbH for releases before 1978. See PRS Hannover for later releases.
Phonodisc GmbH serviced the Deutsche Grammophon Gesellschaft/Phonogram GmbH and all its subsidiaries as well as Polydor International.

Phonodisc was a full service provider for the German market, i.e. the records were usually also pressed in Hannover ("Made in Germany", German copyright text, GEMA). However, exceptions exist and therefore the plant should not be credited if one of the three characteristics is missing.
All injection moulded 7"s from the Polydor and Philips families of labels and carrying a Made in Germany, were manufactured in Langenhagen.

LP and 12" pressings from this company always show a small diameter pressing ring, as introduced in summer 1972 by the predecessor, Deutsche Grammophon Gesellschaft Pressing Plant. So, sometimes it is difficult to differentiate pressings from late 1972 from those released in 1973.
The same problem appears with the different pressing plant credit PRS Hannover in early 1978. It often is not possible to distinguish whether the pressing was done by the one or the other company.
In these cases please explain your decision in the release notes or add the information just to the release notes.
The small diameter pressing rings had different appearances. The version with the 3 dots was thought to only appear in between 1973 and 1975, however also versions with a Deutsche Grammophon, Hamburg credit at the bottom of the labels are known to show this pressing ring variation.

Phonodisc continued what was started by the predecessor Deutsche Grammophon Gesellschaft Pressing Plant for contract pressings.
The custom LP pressings for Metronome Records GmbH can be identified by the code string 0664.### that was used from 1972 until the end of 1975 (but also on later reissues of course). Thereafter the code changed to 0701.### until late 1977.
Also the early numbers of the string 0702.### still belong to Phonodisc GmbH, but sometimes it is difficult to distinguish from the later PRS Hannover versions.
For the LPs of BASF orders a similar string was used: 0666.###. These codes are not to be added as LCCN numbers.

24. Oktober 2020
The Hannover plant, whether called Phonodisc, Deutsche Grammophon, PRS or whatever, consistently produced in my experience the finest quality classical pressings anywhere except Japan. I could buy a Hannover pressed disc in the certainty it would be silent surfaced and expertly cut. Other German plants were very good - Sonopress, Teldec etc. but DG as I prefer to call them were the best. An article in Gramophone magazine (can't remember the year) about a visit by one of their reviewers remarked how few staff there were compared with ? years ago as all the presses were now automatic. The less human handling the better. I found here in the U.K. Decca ran them close in pressing quality.
Antworten Mich bei Antworten benachrichtigen 1 Helpful