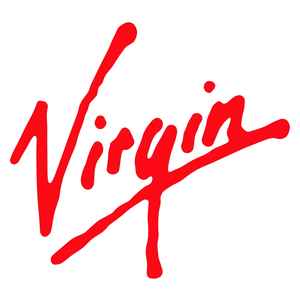 Profil:
Please note, many Virgin issues also carry an EMI logo. This is not a label and EMI should not be added as a label, it instead indicates that Virgin was part of the EMI Group.

Multinational label.
Label Code: LC 3098 / LC 03098
Started by Richard Branson in the early 1970s as an independent label based in London, UK. The record company Virgin Records Ltd. and subsidiaries which used the Virgin brand was sold to Thorn Emi Plc in 1991, the various Virgin trademarks however remained the property of Virgin Enterprises Ltd., since 2012 the imprint has been licensed from Virgin Enterprises Ltd. and is used by various companies that form part of the Universal Music Group.

Roger Dean (4) was the designer of the original famous Virgin label with snakes and dragons.

The green twin label (without outer white ring) is easy to find. It has been used originally in 1976 but it is also available on reissues of older releases. In UK it has been used till 1978, but in other countries (Japan, Spain) there are records up to 1982 with this label. During this period a few titles were pressed with Red twin label (without outer white ring).

The blue label with double Virgin writing logo is well-known on single releases but it has also been used on a few albums.
The area of the green/red label ended in 1987 (UK), but in different countries it has been used longer (Spain 1990, Germany 1988).

The blue twin label (which has never been used for albums) was issued in UK only.

From 1978 many Virgin releases had special labels for the first pressing, often reverting to Label version 10 on further pressings and reissues.

Discussion about this can be found at: http://www.discogs.com/help/forums/topic/371161 - and further clarification would be appreciated. The exact order of label versions 5/6/7 is not known. I would like to add definite ranges of original V numbers. Please do not post queries/answers here but contact me ultimathulerecords Thanks.

July 2015 updates checked with "The Virgin Discography Of The 1970s" by Mark Jones.
Note that his label versions don't exactly correlate with mine, as he doesn't differentiate between the two colour versions of original Roger Dean design, but he does agree with the order of the labels and points out a few discrepancies I hadn't noticed.

An illustrated version of this can now be found at http://www.ultimathulerecords.com/referencevirgin.html