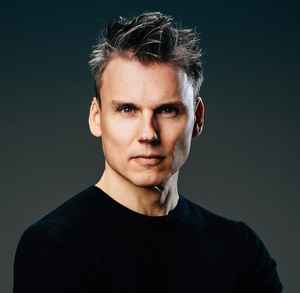 Nombre real:
Kai Franz
Perfil:
Kai Tracid (born as Kai Franz on 17 January 1972 in Frankfurt am Main, Germany) is a trance DJ and producer. The name Tracid originates from the combination of the two music styles Trance and Acid. In 2009 he stopped making music and co-founded a yoga centre. He made his return to the scene in 2020 with the release of his collaborative single 'DT64'.

One of the pioneers but not THE inventor! I was at that time at Frankfurt, the underground scene was big maybe the biggest at Europe at this particular time, many good DJ's and pioneers were all over. Underground Clubs were playing unbelievable music. I don't think you will hear something different than that!

5 de diciembre de 2016
Not a comment on his quality (though I should mention that I love his track 'So Simple'), but I wonder why people are saying he *invented* mixing trance and acid. Many German artists were incorporating 303 lines into trance music in the early-mid 90s.
Ver 1 respuesta

8 de mayo de 2014
Kai Tracid is a great DJ , i agree some of his sounds looks similar from other artists , but so are all artists from the world they all copy and paste stuff from previous artists . But Kai Tracid is in NO way a poser or other insults. He at least invented a new genre Trance&Acid a mixture of them.

The REAL posers are David Guetta and Tiesto those two i have no pitty for them ,they can go to hell!! They dumped many famous DJ's in the world we not even hear anymore, even some music styles evaporated . David Guetta invented NOTHING AT ALL is a fact , and as for Tiesto that guy started good but in his mid glory all was of a déjà vu standard and became just stupid music for the masses is also a fact!

So Kai Tracid livened up a new genre sadly missed in clubs ( if they exist still? ) . I love kinda all styles of music from Electronic to Classic ( yes Mozart,Beethoven,...) but i'm sad yet very upset that some styles needs to disapear because idiots are bored of them, well there is just ONE remedy : don't listen to something you don't like ,is plain and simple!!
Ver 1 respuesta

30 de julio de 2013
It's funny to read stuff like that. Kai was not 'raised from only playing in night clubs, to big stages with thousands of people', he wouldn't be who he became without actually PRODUCING. His music COULD have been produced earlier? So what? He used vintage equipment and created his own sound. Reproaching him with that is like reproaching anyone who used some dated equipment in a creative way, and you go like: "that's nothing special, it could have been done well before that".

The thing is... it hasn't!
The tracks appeared when they appeared. Anyone using traditional music instruments, say, guitars?.. this could have been dome much, much earlier!

And BTW. Anyone who was raised to some sort of stardom can be said of to have been in the right place at the right time. Continued a trend he/she liked? Certainly not his/her own achievement, just a matter of catching a wave. Started one's own new style? Just got noticed when general public got fed up with old stuff and wanted something new.

You may equally accuse us, listeners, that we fell in love with the genre because it was big. Well, without it being prominent, chances are, it would go unnoticed, so I am grateful for that temporary 'hype'. Otherwise, living in a place where it never really took off, I wouldn't have stood a chance of ever coming across it. No mater what was trendy ever since, my taste stood the test of time. Oh yeah, I must be making fool of myself.

Your logic is pathetic. I understand you didn't like his stuff, that's okay. But your other rants aren't based on any logic.

Tracid doesn't quite resonate with you, but calling him/hinting that he is a poser or biter? As whom he posed? Who he deceived?
Oh noes, he got some of our money! Silly me, how could I possibly pay for that? I must be deeply sorry for spending even a single cent and ever loving his music. I'm not! It's great that I came across his music. Are you upset with that?

Who the f**k invented something new? Basic structure of music was laid down centuries ago.
You just come here to offend him and his listeners, who are grateful for his music. Anyone could call your fave artist wanker as well, or point at some trendy stuff of the time. Does it prove anything? This man didn't want to be trendy and just left the scene. I understand I may not like his further development but I am eternally grateful for his beautiful songs.

'Why am i even writing this? This shows mercy...'. I bet you think you're some kind of god and you're simply offended people would call (metaphorically) some other person God. I hope you can see some humor in this (hint: yep, it's a joke).

didn't invent anything new, just capitalized on a a whole bunch of shit that already existed

15 de marzo de 2012
Personally I don't agree with the big words that people are using to describe the work of Kai Tracid. I would rather describe his success as a result of beeing at the right place at the right time with the appropriate packaging. In the early 2000's, the mainstream trance scene had a massive peak, and DJ's and producers got raised from only playing in night clubs, to big stages with thousands of people. Trance Energy for instance, had it's peak during this period of time. During this period, people lost track of qualitative music and Kai Tracid is a perfect example of such.

As a producer, he suffered from an extensive lack of skills and many of his famous releases from 2001/02, could easily had been produced in 95/96, his sound was so out of date. Listen to Trance&Acid, it sounds like something Antiloop did in 95. I would rather suggest that his status as a 'legend', has to do with the fact that he car pooled with the hype and that people grew found of his music due nostalgic reasons. He came when the genre peaked, released a couple tracks that got unreasonable attention, and people treated them as hits of the century. Seriously, come on!
Ver 2 respuestas

Kai Tracid is back! :D

Over his producing years, he has already done everything that he wanted to, and it's enough for him. Probably, that's why he started to do yoga, he finally found the peace in his soul and his mind. He ran out of inspiration, that's the fact. And nowdays, between these musical trends, plastic sounds, he couldn't make anything interesting to the people who simply don't know what Tracid means.

8 de mayo de 2009
Kai Tracid is maybe not the greatest, but for me the most unique and most important trance artist ever. Nearly all of his songs are stunning, but it's the wonderful lyrics that really makes the music special.
Listen and take a look at the lyrics in songs like for example "Suicide", "Conscious", "Express Your Hidden Passion" and "Too Many Times", and you'll see what I mean! Kai Tracid's music and lyrics usually includes themes like drugs, hallucinogens, consciousness, dreams, loneliness, depression, happiness, the meaning of life and people's wish to find themselves. I know his music is not for everyone, but I'm really happy I'm one of those who can really understand the magic in the music. Because there is something special about Tracid's music, something I really can't explain in words...

Thank you Kai Tracid. I hope you know what your music means to a lot of people!
"I should have lived my life much more conscious."