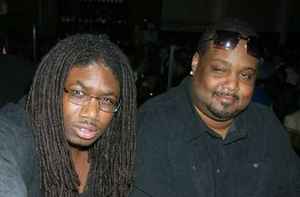 PM Dawn was founded by the two brothers Attrell S. Cordes AKA Prince Be and Jarrett Cordes AKA DJ Minute Mix.
Their cousin Dr. Giggles aka Doc G was added to the lineup for their 2005 comeback, right after which Jarrett was fired from the band. PM Dawn continued with Doc G replacing Jarrett. It has lately been informed that Attrell Cordes suffered from a few strokes and that his health status does not allow him to continue with the band.

In the current state of affairs, their cousin Doc G has practically "inherited" the PM Dawn flag, and is touring as PM Dawn performing their songs.

Personally, P.M. Dawn are a great influence on me. I spent my childhood in the early 80's and grew up on old-school hip-hop, among other styles of music. I never shied away from R&B either, although growing up in the Midwestern United States, there was only so much of it available to a white kid in the Ozarks.

I remember the first time that I heard "Set Adrift On Memory Bliss," I was transfixed that someone thought to sample a song like Spandau Ballet's "True" and throw that "Ashley's Roachclip" sample under it. The composition of the raps were different than what I was used to, with a thoughtful and poetic approach to them compared to the social justice or 'rap battle' themes I was accustomed to. The De La Soul comparisons were somewhat appropriate as there is a stylistic similarity between P.M. Dawn and De La. But Prince Be and DJ Minutemix took the variety of samples they used and cranked it up to 11.

At their most creative, The Nocturnal's lyrics would flow like water and would simply melt into your consciousness. I feel I learned a lot about variety from P.M. Dawn in that they could do something as ambient as "The Beautiful" from "Of the Heart...", to something as raucous as "Downtown Venus" from "Jesus Wept", to a diss song as strong and sample-filled as "Plastic" from "The Bliss Album."

People may malign P.M. Dawn for their eclecticism, but to me that made them even more wonderful! When I heard that Attrell passed away, it hurt my heart and I had a good cry. But then I thought about how much good music that P.M. Dawn made and it seems to be a wonderful legacy to leave behind.

(Regarding the new music being released under the name, I'm not too keen on it myself. I won't say that it's bad, but I will say it isn't something I will listen to very much. TBH, I feel when Prince Be passed away, so did the ability to capture his way of creating music.)