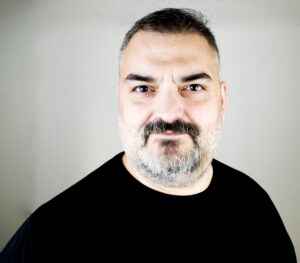 Nombre real:
Pedro Miras
Perfil:
In 1993, he released his first maxi-single, with an extensive musical career as a producer that consolidated him at the top of the sales charts in Spain in the 90s.
After a break in music creation for 13 years (2006-2019) new references hit the market, gathering new sounds and sonorities for tracks from around the world.
Various Top 10 lists:
Germany | Holland | Mexico | Belgium | England ….
He publishes in more than 36 countries and his discography is included in hundreds of compilations.

Deejay since 1986.
From then until today, it is his ever-expanding career, exploring new sounds, technologies, and ways to always elevate the dance floor. His reason for enjoying his profession.
In 1988 he started at different stations, first as a radio presenter and later specialized as a music technician and consultant.
At this stage he performs from children's programs to sports broadcasts, newscasts, magazines, etc ...
In 1993 he collaborated with the Toni Peret program, »It's your time» in Onda rambla (Catalonia), two years later he became part of the technical and talk team of the program, this time at national level in Onda Cero, «Ruta10 / It's your time ».
In 2006 he is the corporate voice, technical and announcer for one of the Vocento group stations, September 2010 he starts as technical chief the broadcasts of EsRadio in the province of Castellón.
Advertising, voice-overs, voice overs and a long list of collaborations keep him active more than 30 years later.
Sítios:
pedromiras.com
En grupos:
Attica (3), Beat & Peter, Division Barcelona, DJ's At Work, Fraktal, Free!!, Object One, U.F.O. (2), Ufo Waves
Variaciones:
Verlas todas | Pedro Miras
Miras, P. Miras, P.Miras