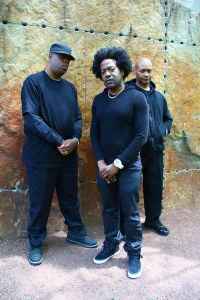 Their love for House Music started back in the early 80's when friends Pierre Spanky and Herb J would go hear innovative DJ Ron Hardy play at the infamous music box in Chicago and would get lost for hours on end in his sound. Smith talked to Pierre and Herb about forming their own group, later to be named PHUTURE, so they could produce their own music and give what came about of their sessions to Hardy to play in his sets. In 1985 Spanky came across a (at the time) written off Roland TB-303 not knowing that they would go on to make history when they created a new type of sound to come out of it and Chicago. Tweaking the knobs at the same time the patterns were playing they used the 303 for something other than what it was originally made for. It was to be called later on by those who would hear it as "Acid".

PHUTURE'S debut track "Acid Tracks" caused havoc on dance floors in Chicago when it was originally released in 1986 and Hardy broke it on cassette tape in his sets. It then went on to ignite a fire in Great Britain when Marshall Jefferson produced it and it was officially released on Trax Records in 1987. That track went onto spread around the world many times over and spawned immolators and fans to this day still crediting it as the reason for them wanting to produce music or the reason for their emergence into the dance music scene.

DJ Pierre left the group in 1990 and Spanky carried on with PHUTURE with various members over the years till 1996. He then formed Phuture 303. Ron Maney (aka DJ Skull) and Roy Davis Jr. worked on one occasion as Phuture The Next Generation.

The TB 303 SOUND has amazing origins that we all will still keep on discovering once we all go back and listen through history. ... It is so fascinating to hear this sound for the first time that I am speechless... So I'll shut up now and. . . Let you listen for yourselves... 1984 wink wink ...

28 de febrero de 2018
If you are reading this, take the time to go through the discography of these experimental geniuses. If you claim to be passionate about electronic dance music, I will rightly assume you have the majority of trax by Phuture already in your collection, if not why?!