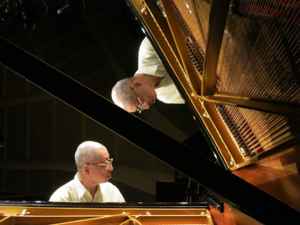 Nombre real:
福居良
Perfil:
Ryo Fukui (福居良 Fukui Ryo, June 1, 1948 – March 15, 2016) was a Japanese jazz pianist based in Sapporo. He played regularly at the "Slowboat" jazz club in Sapporo of which he and his wife Yasuko were the owners.
He began to teach himself the piano in 1970 at the age of 22, releasing his first album, Scenery, six years later and his second album, Mellow Dream, the year after. He continued improving his skills over the following years in live performance, often appearing in a trio and playing at the Shinjuku Pit Inn, Kichijōji "Sometime" jazz club and the "Jazz Inn Lovely" in Nagoya. A third album, My Favorite Tune, which was recorded in 1994 and was released in 1995, and has fallen into rarity, with only a few CD copies of the album known in existence. It was followed by In New York four years later, in trio with the drummer Leroy Williams and the bassist Lisle Arthur Atkinson. A Letter from Slowboat is a live album released in 2015 from his time at the "Slowboat" jazz club.
Sítios:
fweb.midi.co.jp, Wikipedia
En grupos:
Ryo Fukui Trio
Variaciones:
Verlas todas | Ryo Fukui
Kyo Fukui, R. Fukui, R. Fukui , R.Fukui, 福井崚, 福井稜, 福居良

9 de noviembre de 2017
There was apparently another album released by him called "My Favourite Tune". There's no information about it anywhere though. Does anyone know anything about this? It would be a great shame for it to get lost in history.

18 de febrero de 2013
I'd love to know more about Fukui. There is very little information about him around, so if anyone can point my in the right direction I would greatly appreciate.