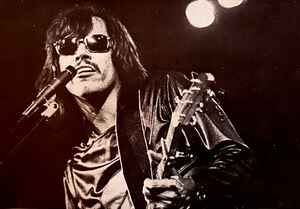 In the Evacuation of East Prussia in early 1945, in harsh winter conditions, his mother first had to flee with the baby boy from the advancing Soviet troops. In 1948, the two also fled from Arnstadt in the East German Soviet occupation zone to resettle in Hanover, West Germany (as recounted in his song "Renegade" on the album Steppenwolf Seven). Located in the British occupation zone, teen aged Joachim, suffering from eyesight problems, listened to music broadcast by the British Forces Broadcasting Service before his family moved to Canada in 1958.

In 1965, he joined a blues rock and folk music group named The Sparrows (later known as The Sparrow), which had moderate success in Canada before moving to California, augmenting its line-up and changing its name to Steppenwolf in 1967. With music that pioneered hard rock and heavy metal, Steppenwolf had international success with songs such as "Born to Be Wild", "Magic Carpet Ride", "Monster", "The Pusher", and "Rock Me". This was multiplied by the use of "Born to Be Wild" and "The Pusher" in the 1969 movie Easy Rider.