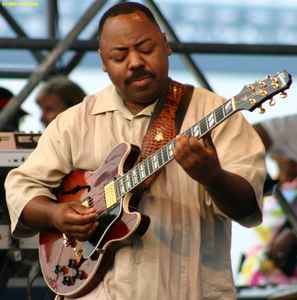 Born on 30.12.1959 in Los Angeles (USA)
One of the most wanted L.A.-based session guitarists during the '70s and '80s.
Has worked for The Temptations, Gerald Alston, Bobby Womack, Luther Vandross, Patrice Rushen, The Jacksons, Pointer Sisters and many more ...
He has also released some solo records with Atlantic at the end of the '80s and other, more smooth jazz oriented, in the beginning of the new century on Blue Note.
--------------
Guitarist Paul Jackson Jr. joined "The Tonight Show Band" in 2010 with Musical Director Rickey Minor.

Jackson began his career in entertainment at 7 years old while acting on numerous television shows, commercials and films such as "Good Times" and "The Sting." At age 12, Jackson started playing the guitar. He joined the family band that included his siblings, his mother, and good friend Cornelius Mims.

When he was 18, Jackson broke into the Los Angeles studio scene and has since contributed his talent to such artists as Whitney Houston, Michael Jackson, Barbra Streisand, Patti LaBelle, The Crusaders, Johnny Mathis, Gladys Knight, Ella Fitzgerald, Dave Koz, Aretha Franklin, Luther Vandross, Bobby Brown, Steely Dan, Chicago, The Temptations, Lionel Richie, Elton John, Kenny Rogers, Jewel, and Barry White. He remains one of, if not the most recorded guitarist in history.
Jackson's television credits include "American Idol," NBC's "America's Got Talent", "The Grammys", and "Celebrity Duets." He was the composer for the TV shows" "Martin" and "Townsend Television" and composed music for the movie "Undercover Brother." Paul was also the musical director for the NARIS Icon Awards.

In addition, Jackson also boasts an impressive solo career that includes six CDs, the first of which received a Grammy Award nomination, and a #1 single at jazz radio.