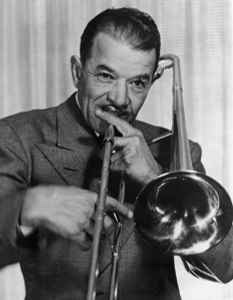 Nombre real:
Edward Ory
Perfil:
American jazz trombonist and band leader, acclaimed as the greatest trombone player in the early years of Jazz. Born 25 December 1886 in LaPlace, Louisiana; died 23 January 1973 in Honolulu, Hawaii.
Note: Credits that either are the real surname alone (or misspellings thereof) or include the real forename (or its initial) belong to the real name profile Edward Ory.

From 1912 to 1919 Ory led one of the most popular bands in New Orleans which featured many of the great musicians who would go on to define the Hot Jazz style. At various times King Oliver, a young Louis Armstrong, Johnny Dodds, Sidney Bechet & Jimmie Noone all played in Orys' band. Relocating to California for health reasons in 1919, he assembled a new group of New Orleans musicians on the West Coast and played regularly under the name of Kid Ory's Creole Orchestra. In 1922 they became the first African-American jazz band from New Orleans to record, recording under the name of Spike's Seven Pods Of Pepper Orchestra. Moving to Chicago in 1925 he played again with King Oliver, Louis Armstrong and with Jelly Roll Morton, among others. The Depression years saw Ory playing very little and operating a chicken ranch with his brother. Ory revived Kid Ory's Creole Orchestra in 1943 and played, toured & recorded Jazz until he retired in 1966.