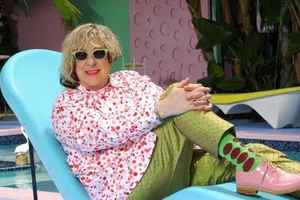 Nombre real:
Alta Sherral Willis
Perfil:
Allee Willis (born November 10, 1947 – died December 24, 2019, Los Angeles, California, USA) was an American songwriter, multimedia artist, set designer, writer, director, and collector. Willis is known as an author/co-author of seminal pop and disco mega hits, including September and Boogie Wonderland by Earth, Wind & Fire, Neutron Dance by Pointer Sisters, What Have I Done to Deserve This? by Pet Shop Boys (co-written with Neil Tennant and Chris Lowe), and I'll Be There For You (Theme From "Friends") by The Rembrandts – one of the best-selling TV themes of all time. Throughout her career, Allee Willis collaborated with many prominent artists and composers across various genres, such as Bob Dylan, James Brown, Herbie Hancock, Deniece Williams, Cyndi Lauper, Lamont Dozier, and Maxine Nightingale. In 1986, Willis won a Grammy Award for Best Score Soundtrack for Music From The Motion Picture Soundtrack - Beverly Hills Cop, which included two of her songs: Neutron Dance by the Pointer Sisters, and Stir It Up by Patti LaBelle. She was inducted into the Songwriters Hall of Fame in 2018.