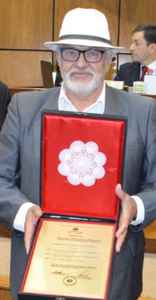 Nombre real:
Celso Duarte González
Perfil:
Paraguayan harp player, Celso Duarte González is one of the most internationally successful Paraguayan harpists and considered one of the most virtuous players of this instrument. He was born in Villarrica, in the department of Gairá, Paraguay. At the end of the sixties, he settled permanently in Mexico forming the Ypakaraí duet. Together with his family with whom he formed the group Los Duarte. During more than 50 years of artistic career, Celso Duarte González has been a great exponent of the Paraguayan harp at an international level, performing around the American continent, in Europe and Asia. Duarte currently lives in Mexico City, where he works as a soloist, teacher and director of the ensemble Arpas de América, the group Los Duarte and the Trío Duarte.