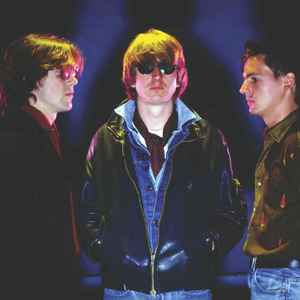 Perfil:
British synth pop / art rock band founded in 1981 in London and disbanded in 1991. The group had a string of international hit singles including "Talk Talk", "Today • It's So Serious", "It's My Life", "Such A Shame", "Life's What You Make It" and "Living In Another World".

They moved away from synth-pop to a more experimental form with the album The Colour Of Spring in 1986, and their critical reputation increased.
Their final two albums, Spirit Of Eden (1988) and Laughing Stock (1991), are highly acclaimed and remain influential to experimental alternative rock genres.

With Simon Brenner out, Tim Friese-Greene was recruited to assist with the recording of their second album It's My Life (1984) and he soon became the band's producer and de facto fourth member. He played keyboards and became Hollis' frequent songwriting partner, co-writing all the songs on The Colour Of Spring (1986), Spirit Of Eden (1988) and Laughing Stock (1988). Although a major contributor to the band's studio output, Tim Friese-Greene did not regularly play with the touring band, and was absent from the band's publicity material.
Sítios:
snowinberlin.com, Facebook, progarchives.com, Wikipedia, YouTube
Miembros:
Lee Harris, Mark Hollis, Paul Webb, Simon Brenner
Variaciones:
Verlas todas | Talk Talk
Talch Talch, Talk Tlk, Talk, Talk, Talk-Talk, トーク・トーク

5 de marzo de 2019
RIP Mark Hollis an absolute genius you will live on. Thank you

26 de febrero de 2019
What an indescribably sad day. Rest in peace Mark Hollis and thank you for your music.

26 de febrero de 2019
RIP Mark Hollis. Talk Talk left an inprint in musical history. Spirit Of Eden is a masterpiece and one of the most beautiful recording ever.

25 de febrero de 2019
RIP Mark. Thank you for so much beautiful and challenging music.

25 de febrero de 2019
Always hoped for some kind of reunion or even new material, but I guess he new better than us. Such beautiful melodies. Never to be forgotten.