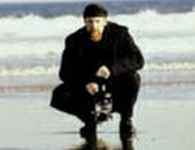 Nombre real:
Quinn Smith
Perfil:
is a drummer and recording artist on Orison Records and also composes music for television and film. Since graduating from the New England Conservatory of Music with a Bachelor's Degree in Jazz Performance, he's collaborated with such notable artists as Michael Brook, Mitchell Froom, Paula Cole, Belinda Carlisle, East Mountain South and Donna De Lory (Madonna's long time background singer). In 1994 his critically acclaimed debut CD Quinn was released and charted number two on Virgin Megastore's 'Top 30'. It remained there for nine months with four of its songs being featured in the movies Silent Trigger in 1994 and Father (Winner of Damah Film Festival Award) in 2001. In 1996 his second CD Ecstasy in Avila, which included the song Sacred Revelation, aired on radio nationwide and most notably on Morning Becomes Eclectic with Chris Douridas. It charted both on the Gavin and CMJ charts and was also featured on several compilation CDs, including Elevation II and Respirar II. His third CD called The Solemn Vow, released in 1998, was conceived as a modern world opera ballet and merged world music and classical music together into a very unique hybrid. In 2000 he released his fourth CD called Chasing Silence on his own independent label called Orison Records. Many of its tracks are currently played on Mystic Radio.com. In 2003 Orison Records released Quinn's fifth CD, Beneath the Quiet, which made the 'Best of 2003' list at Backroads Music.com. It's currently in rotation on Morning Becomes Eclectic 89.9 KCRW with Nic Harcourt in Los Angeles, WSCS 90.9 FM in New London, NH with DJ Frederick and WNEC 91.7 FM in Henniker, NH.

He's also composed numerous pieces for television and film, including the music for the launch of the UPN Network, the Roseanne Talk Show theme and the opening title song for the film Sub Down called Saving Rain, featuring Stephen Baldwin and Gabrielle Anwar. He's also written many compositions for the top Music Library companies that can be heard on television, film and radio around the world every day.