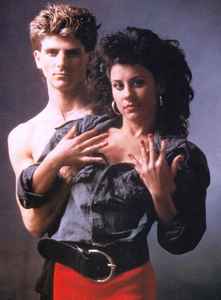 Perfil:
The history of Radiorama could be separated into two different stories: the first, between 1985 and 1987, and the second, between 1988 - 1990. That is to say, when Italo Disco and Eurobeat records succeed all around on European dance floors. Founder of this project was Aldo Martinelli on Mauro Farina request. With his collaborator Simona Zanini wrote first single "Chance To Desire". But due to the fact, that he was involved in the production many other projects, his name wasn't to be listed on the cover. Mauro Farina did otherwise. Because of this, Martinelli withdraw from the further composing. Mauro Farina then longer continued to work on next songs.

The Radiorama productions were sung by Mauro Farina (lead vocal) and Clara Moroni (female voice of the group), except first single, where Marco Bresciani was male vocal, and Simona Zanini as female vocal. Radiorama songs was composed, conducted and arranged by Mauro Farina and Giuliano Crivellente (who also did the executive production). The ”background” producers of these records were, mostly, Paolo Gemma and Marco Bresciani. Since 1989 - 1990, there have been released some new records signed by ”Radiorama”, but these are Eurobeat tracks.

There was a great comeback in 1993. Single "Aliens 2" sung by M. Farina, again became big hit. Next tracks belonged to Euro House style didn't contribute to the great success. Official vocalist in the 90s was Angelo Morales, but can't be ruled, that he was only dancer, and male vocal still belonged to M. Farina. In 1998 and 1999 tracks ”Give Me The Night”, ”Beautiful Man”, ”Ninna Ninna Oh”, ” More Time” were realized with the participation of french project TX Express, by cooperation M. Farina for Ramdam Factory label. TX Express formed rapper, model and dancer Ramses and Fauve, female face of group. That are also unconfirmed information. Is said, that in these time singer could be Annerly Gordon and Melody Castellari. In album "The World Of Radiorama" it's known, that sung Jackie Bodimead, Juliet, Ricky H. i Fabio Serra, and possible Umberto and Manuela. About song "It's A Lonely Wait" and "Total Eclypse Of The Heart" (Bonnie Tyler cover) it's known only that first sung Cristina Dori, and second again Melody Castellari.
Sítios:
Wikipedia
Miembros:
Antonella, Clara Moroni, Daniela Rando, Elena Ferretti, Giuliano Crivellente, Jackie Bodimead, Mauro Farina, Melody Castellari, Oscar (5), Rachael Doran, Simona Zanini
Variaciones:
Verlas todas | Radiorama
Radio Rama, Radiograma, Radiogramma, Radiorama Megamix

1 de diciembre de 2016
Hello
Is anybody know if the song...MANITU..come up on 12' vinyl ??
Responder  Ver 1 respuesta Notifícame Helpful