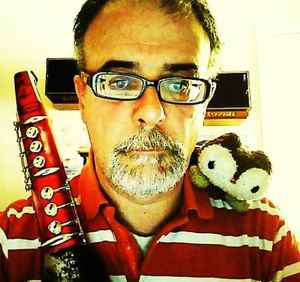 Perfil:
Spanish artist from Barcelona trained in the classical study and mechanical technique of baritone saxophone, has dedicated much of his work to the timbral research and electronic transformation of the sounds of that instrument. Currently, he explores the phonetic possibilities of voice and the manipulation of all kinds of everyday objects, and their integration into a surrealist and pataphysical discourse.

It began in 1976, founding the group Macromassa with which he has edited a good number of records.

During the 1980s he was part of different musical experiences such as Cuarteto Zap de Saxofones (1981), Unknown Music Laboratory (1982), The Mathematics (1983) as well as making different recordings under the heading of Juan Crek. He also collaborated in some way with groups such as Clónicos or Aurelio and Los Vagabundos.

At the beginning of 1998, he left definitively the research and practice of the saxophone, as well as the production works (except occasional occasions), to dedicate himself to perform custom music, collaborations with other musicians or artists and develop more personal projects, such as' Los Planetas Humanos' (solo), a project that consists of 11 electroacoustic pieces (computer) and archetypal texts (voice), where metaphors are made about family and friends in a melancholic, destructive and pataphysical way.

With 'Materia viva' (solo), he elaborates a surrealist project based on the phonetic possibilities of the voice and its mixing with pre-recorded bases, manipulated everyday objects and his pataphysical-theatrical exhibition

In 2004, with Ongo (along with Sergio Oca, Bet Gérgola and Antonio Puertas), he fuses rock and experimental music. It was a band composed of two bass players, a drummer and voice with effects.