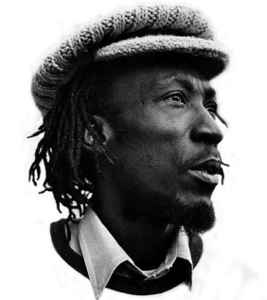 Alton Ellis was born in down town Kingston into a musical family and raised in Trenchtown, Kingston. He was the older brother of reggae singer Hortense Ellis and at the end of his life father of 20 children including Noel Ellis.

He grew up being a good dancer and winning some dance contests at Vere Johns' Opportunity Hour. His first musical steps happened in 1959 when he started with Eddie Parkins as Alton & Eddy. He first recorded for Blue Beat, Vincent "Randy" Chin's Randy's later like nearly everyone at that time for Clement "Coxsone" Dodd's Studio One. He scored some massive hits like Muriel / Walk All Over till Perkins left to the U.S. and he had to look for a new partner. Alton stayed in Kingston and worked as a painter till he found a new genius partner in John Holt, till Holt joined Paragons.
After that Ellis formed The Flames including his brother Leslie Ellis, David "Baby G" Gordon and Winston Jarrett. The trio was first planed to be his backing band, but soon they released a few singles as Alton Ellis & The Flames. He also worked as a studio musician at Brendtford Road and his voice can be heard in a lot of backing vocals till 1967. In 1967 he joined Soul Vendors to tour the U.K.

He also released the first declared rocksteady song "Get Ready - Rocksteady" which can be found on Get Ready Rock Steady. He music happened cause in a recording session, the bassist didn't show up and Ellis forced organ maestro Jackie Mittoo to play bass instead. Mittoo couldn't keep the speed and that's why a slower rhythm emerged. He released another classic rocksteady record Sings Rock And Soul. After leaving Studio One cause due to payment reasons, he signed a contract a Dodd's big rival Arthur "Duke" Reid's Treasure Isle. Reid's good connections to the U.K. allowed that Alton got well distributed through Trojan Records and GAS.

"The Godfather of Rocksteady" traveled regularly to England, and even moved there in 1973 after spending some years in Toronto, Canada. When moving to the U.K., he stopped all his Jamaican band projects. In London, he started his own business with a record store called Alltone, later also converged to a same titled label. He recorded with British producers and toured till the end of his life.