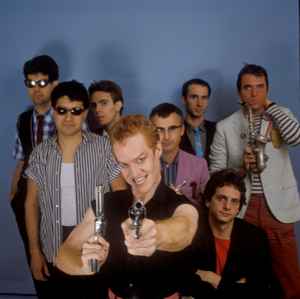 Perfil:
Oingo Boingo began in 1972 as The Mystic Knights Of The Oingo Boingo and was initially led by Richard Elfman as a musical theater troupe. Richard's brother Danny Elfman took over control in 1976 and in the same year they performed on the television program The Gong Show. In 1977 Richard Elfman had the act perform the soundtrack project for his film Forbidden Zone.

In 1979 the act shortened their name to Oingo Boingo and reformulated their sound. The band featured a unique blend of styles which drew a dedicated following in the L.A. area and generally among the New Wave / Punk scene, but major commercial success remained elusive. The high point of their popularity was 1985, when their biggest hit "Dead Man's Party" was featured in Rodney Dangerfield's comedy film Back To School, together with a cameo performance by the band. Danny Elfman went onto become the preeminent film scorer of the late 20th century. The band continues to record into the mid 1990s, again shortening the act's name to merely Boingo and again shifting their sound for the final years.

After 23 years and 7 full-length studio albums, Oingo Boingo disbanded after giving a "farewell" concert at L.A.'s Universal Amphitheatre on Halloween in 1995, reverting to the name Oingo Boingo for this show.

There's an amazing array of sounds present, but the main feeling is angular New Wave. It can range from downright Funk to (almost) Metal to be honest!

Every track on the first three albums is inventive & exciting, and while Danny may not always agree with your particular political landscape (I still don't know for sure if he's serious or not in tracks like Capitalism), you always find yourself singing along.

After Dead Man's Party they changed style quite a bit, like many 80's bands did.