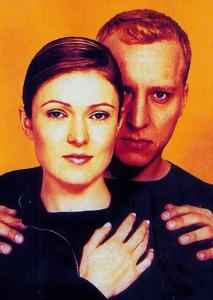 The band initially formed as The Journey Through in 1983 by Jon Marsh & Steve Waddington, who soon recruited Tim Havard on bass.
Renamed The Beloved in 1984 as Guy Gausden joined on drums, the band began to play live. After 2 Peel Sessions in 1985 and 4 single releases in 1986/7 they reemerged in early 1988 reverting back to the original duo of Marsh & Waddington.
Now on a major label record releases recommenced with the barely-noticed "Loving Feeling," followed by "Your Love Takes Me Higher," a significant club hit, then "The Sun Rising," their breakthrough record, reaching #26 in the UK Charts in autumn 1989.
After releasing "Happiness," and its sister remix album "Blissed Out," in 1990, Waddington left the band the following year.
The Beloved returned in 1993 as a duo of Jon & his wife Helena with the single "Sweet Harmony," a major hit in the UK and across Europe. The album "Conscience," followed and 2 more singles. Followed in 1996 by the album "X," with the top 20 hit "Satellite."

Having neither split nor ceased the band is now dormant.

18 de mayo de 2020
Jon can you hear us?! Repress all the ALBUMS! We need the vinyl! Some amazing limited edition colored vinyl would be awesome!
Ver 3 respuestas

15 de marzo de 2020
Another band whose trajectory was fundamentally shifted by the Acid House scene. Original Shoomers (Danny Rampling's Club Shoom) Jon Marsh and his wife Helena Marsh used the former indie band shell to create a club sound that totally captures the moment of post Ibiza London 1988. I would suggest that they were a very important bridge to what later became the Indie Dance cross-over. Last I heard Jon Marsh was ploughing a career as a DJ... The album X is criminally underrated IMO

29 de abril de 2018
'Where It Is' is one of my favourite albums. I saw The Beloved play live only once and they were incredible. 'This Means War', 'A Hundred Words' and 'In Trouble and Shame' are superb songs which are on regular rotation on my turntable all these years later. I struggled to enjoy their sound from 'Loving Feeling' onwards, but their early material is magical.
Ver 1 respuesta

8 de agosto de 2011
Hands down, one of my biggest influences. Call it acid house, house, techouse, pop...it is in a genre unto its own. Jon Marsh's voice oozes soul and passion. In addition to making amazing music, Jon is a talented DJ and one hell of a nice guy.

10 de febrero de 2004
I'm surprised almost no one gave his opinion about Beloved. The band is definitely worth mentioning. It's a fairly unique mixture of house, techno and commercial music. Really fantastic in some moments, driven by clear ideas of love, freedom... etc... :)
Ver 1 respuesta