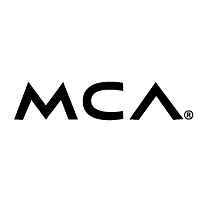 Perfil:
Music Corporation of America (MCA) was founded in Chicago in 1924 as a talent agency by Dr. Jules Stein and Mr. William R. Goodheart, Jr. and began to produce TV shows in the late 40s. In 1958 MCA acquired the Universal Studios property and also Paramount's pre-1948 film library for its MCA TV division.

In for the UK and much of Europe, MCA Records signed a licensing deal with EMI Records Ltd. circa September 1973, which came into effect on 1st January 1974, thus ending MCA's 40-year relationship with The Decca Record Company Limited.

International distribution (outside of US) was handled by WEA from 1 January 1984 onwards (with some countries not moving to WEA until late 1984 because of existing deals), and then by BMG from 1990 onwards.

This label includes many releases branded "MCA" or "MCA Records", regardless of which MCA corporate entity, if any, is mentioned as trademark owner, copyright owner, or point of contact. However, there are many other MCA brands and companies in Discogs, and some releases may be found there instead of (or in addition to) this label, depending on circumstances. These or other corporate entities such as MCA Records, Inc., Music Corp. of America Inc., or MCA Inc. may appear on releases with the "MCA" or "MCA Records" brands. Corporate groups may also be credited, including MCA Music Group, the MCA Entertainment Group, and the MCA Music Entertainment Group, as well as divisions of MCA Music Publishing like MCA Communications, Inc. and many regional "MCA Music" corporations which may be conflated with the aforementioned MCA Music Entertainment corporations.

21 de septiembre de 2016
Pedantic observation:
Although the 'new style' MCA logo had been in use since at least MCA-10131, the classic MCA logo was still appearing on the face of many CDs through MCAD-10201 (circa April '91). The classic logo continued to appear on the labels of LPs and 45s until these formats were phased out.