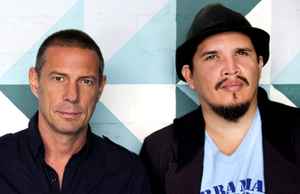 2 mai 2022
Absolutely brilliant work from this duo. Easily the best US electronic outfit in my book to date. Very diverse and authentic elements to their music from a wide variety of global influences. Stellar.

5 juillet 2018
Thievery Corporation are masters of taking sounds and atmospheres from all over the world and making beautiful music collages from them. Hence the name. A duo of Eric Hilton and Rob Garza creates a perfect combination of influences. Latin (samba, bossa nova, pachanga etc.), Jazz, Dub, Lounge, Electronica, Reggae, Traditional sounds from India, Middle East and Africa. The list goes on and on. They are amazing live. This duo doesn't have a genre or a particular style. Recommended for anyone that wants to explore world sounds.

21 novembre 2003
All of Thievery Corporation's releases up until the "Lebanese Blonde" 12" and the "Abductions & Reconstructions" remix album are vital for all the downtempo fans out there. And although they weren't the first ones at the game, the fact is that "Sounds From The Thievery Hi-Fi" is an album that set a template for much of the downtempo/lounge/chill-out music that came after. A template that has been rarely (if not never) equaled, because songs like "38.45", "Shaolin Satellite", "The Foundation" et al have a certain something that makes them seem more than fine at any given time. In two words: perennial classics.
"The Mirror Conspiracy", although avoiding the dreaded sophomore slump, doesn't really live up to the expectations, sounding already like the formula is wearing thin. And that is what "The Richest Man In Babylon" really sounds: a project stuck in a rut and, more importantly, making music that does not stand in the pack of many-a-below-average projects in an already over-saturated style. Let's just hope they see the error of their ways...