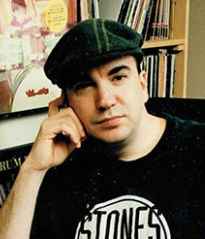 Vrai nom:
Paul Kilianski
Profil:
Paul came up in the early 80's as a snot nose DJ, making a name for himself spinning at hard scrabble community centers and parties in his hometown of Poughkeepsie, NY.
Toward the later half of the decade, he began dabbling in production; first with local crew Magnum Force, then with early Source magazine Unsigned Hype winner, J Rock. After relocating to Manhattan in the 90's, Paul embraced the role of producing wholeheartedly when he purchased an Akai MPC-60 II.

In quick succession, he began releasing his own material on wax, including the now classic "Beats Anonymous" and the best selling DJ Break series, "5 Fingers of Death" and "Drum Library" (which Kanye West has often relied on for his own production). His infamous "Fist of the White Lotus" instrumental has been freestyle'd over by countless rap legends including Biggie Smalls & Jay-Z.

Paul spent a few years in the Bay Area of Oakland/San Francisco where he established himself as one of the more sought after beatsmiths during the thriving indie hip hop scene of the late 90's. With "production credits to die for" (Spine Magazine), Paul has produced & remixed some of the best from east to west and beyond, including Biz Markie's infectious comeback singe, "Turn The Party Out"; an exclusive remix of the Beastie Boys' "Hey Ladies" for their Anthology DVD (Criterion); "Conflict"- the only collaboration between rap legends Guru (Gangstarr) and Masta Ace; his own single "Definition of Nice" featuring AG (DITC), Genessee & Babu (Dilated Peoples) to name but a few. Other credits have Paul working with such luminaries as Mark Ronson, Sharon Jones, Quantic, Ol' Dirty Bastard, Black Thought (The Roots), Talib Kweli, Tony Touch, Lord Finesse, Party Arty, Phil Most Chill, Foreign Legion, Prozack, Rasco, Planet Asia, El Gant, Swollen Members (including 3 songs used on EA Sports' NBA LIVE franchise), Abstract Rude, Jamal-Ski, Agallah, Nightmares On Wax, DJ Yoda and Lady Kier (DeeeLite).

Paul is also responsible for such critically acclaimed mix tapes as "Breaks For Days" and "Soul On The Grill".
His remix of Jay-Z's entire "Black Album" was hailed as "a masterpiece" by XLR8R magazine and lauded by The New York Times as well.

As a DJ, Paul has played all over the world including NY, LA, Las Vegas, London, Paris, Tokyo, Sydney and back again.

This inspired Paul to launch his new label, SURE SHOT! - which he founded in 2011 with his partner (and high school sweetheart), Desarée Colón.

21 octobre 2003
DJ Paul Nice, originally from NYC, now residing in San Fransisco's Bay Area which seems to be a form of mecca for turntablist DJ's to live or hangout around there.

Mr Nice, turntablist, beat digger, producer and purist Kung Fu film fan is a very underated talent and is not really that well know outside of Bay Area turntablist fraternity. Probably needs to go on tour with a actual band to showcase his talents and raise his profile to a larger crowd. Pretty much the same as what Cut Chemist or Babu have done with Jurassic 5 and Dilated Peoples respectively.

That said he still rocks a party and should be easy to catch rocking a crowd somewhere around the Bay Area.

If you can track it down, try www.turntablistlab.com, you got to grab a listen to his "Breaks for Days" mixtape.