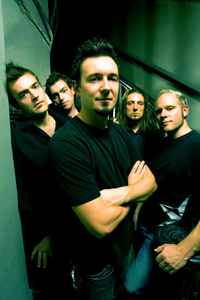 11 avril 2022
If this band had stuck to the style on Submit, they could've been industrial metal GODS.
Répondre Me notifier Helpful

30 octobre 2021
As an early Godflesh, Sonic violence and skin chamber fan, my greatest pitch shifter moments are Industrial, Submit and
"desensitized" Got the remix CD EP also but that one was not completely my cup of tea as weren't the folow up albums (matter of taste maybe)

5 juin 2020
Great band which sadly get a lot of flack for changing their style throughout the years. I find value in every album they have made, and am very sad they are not active anymore.
Répondre Me notifier 1 Helpful

23 octobre 2003
Back when they were grindcore-with-a-drum-machine: awesome. <i>Submit</i> is an incredible album. They move more toward industrial on <i>Desensitized</i>, which wasn't bad. When they added the punk element, though, they took a downturn, IMO. I'll stick to <i>Submit</i>, thanks.
Répondre  Voir 1 réponse Me notifier 2 Helpful