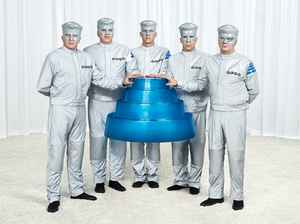 Profil:
New-wave group popular throughout the late 1970s and early 1980s, formed by a group of art students at Kent State University, principally Mark Mothersbaugh and Jerry Casale. Their name comes from the central concept of "de-evolution" - the idea that mankind is devolving instead of evolving.

Devo was formed in 1973 as 'Sextet Devo,' a division of the arts collective Art Devo. This early line up featured Gerald V. Casale, Mark Mothersbaugh, Robert Casale, Bob Lewis (5) and two others. In 1974 the group rebranded as simply 'DEVO' (stylized in all caps) and began writing material for their first album. Bob Lewis and Robert Casale had left the group by this time, and Bob Mothersbaugh & Jim Mothersbaugh had joined. This line-up is primarily featured in the Hardcore Devo collections. Shortly after production wrapped on their short film The Truth About De-Evolution, Robert Casale rejoined the group along with new drummer Alan Myers, who replaced Jim. With this line-up, the group began releasing material through Booji Boy Records and attracted mainstream attention through live performances and singles.
In February of 1978, the group recorded their first album, produced by Brian Eno, and the group were given a multi-album contract with Warner Bros. Records and Virgin.
Midway through production of their second album, Duty Now For The Future, Devo shifted from their earlier guitar-based sound toward a more keyboard-heavy one, with rhythm guitarist Robert Casale switching to keyboards and bassist Gerald Casale switching to synth-bass. This new style would be a defining one and produced the group's biggest hits.

After the commercial failure of their sixth studio album, Shout, the group were dropped by Warner and Virgin. They were forced into a four-year hiatus, returning in 1988 with David Kendrick replacing Alan Myers on drums. The Kendrick line-up of the group only officially lasted for three years before entering another hiatus in 1991. Throughout the 1990s, Devo would reunite for one-off singles for film soundtracks before officially reuniting in 1996 with Josh Freese on drums. After this, Devo consistently toured a greatest hit show before releasing their ninth studio album Something For Everybody in 2010.

On February 17th, 2014, Robert Casale died of heart failure. The group briefly continued without him on the Hardcore Devo tour, in which they performed material written between 1974 - 1977. Devo continues to perform live with Josh Hager on rhythm guitar and keyboards.

I listened to these guys along with neighbouring Cleveland band, the spooky Pere Ubu from 1978 and onward. After reading English music papers Melody Maker and NME in the early 80s, I soon realised that they were already quite old (eg. Mark being born in 1950), although not Deborah Harry old (b. 1945)...so I realised they'd been making music since the early 1970s (the earliest stuff I have is from 1974). I also bought a very expensive VHS tape from their mail order catalogue (along with Devo - EZ Listening Muzak Cassette on a C-60 and a Devo suite that didn't fit...), 'The Truth About De-Evolution'. It cost ~$60 in 1981 (I was 19-20), which today is about 4 times as much. I think you can watch it for free on YT now...

I thought they'd become too commercial around 1980 with their 3rd album, 'Freedom of Choice', though, By that time, Robert Margouleff of Tonto's Expanding Head Band, had learned them to play various synths. But the lyrics on environment and consumerism were similar to what European RIO* bands from France, Sweden, Czechoslovakia, Germany, Denmark, Norway, UK and so on wrote already around 1970. Still, I continued to buy their LPs on sale for another 10 years (1990), simply because they made fun synth-pop (also, I was addicted to LPs for 30 years...). Also, around 1984 I saw them LIVE in Copenhagen, Denmark.

So now I've been watching this 2021 US documentary on TV, 'Devolution: A Devo Theory'**, that's all about how important their 1980 synth-pop hit 'It's A Beautiful World' was/is, and how early on they understood what's happening to our world (after themselves having experienced the Kent State murders in 1970) with that song; Greed, lying politicians, the environment going down the drain...(the world's first Environmental Conference*** had already been held in Stockholm here in Sweden in 1972 though...). So they were anything but pioneers. American pioneers, yes. But the world is larger than USA...

While watching this docu I wondered wtf happened to their first album that really meant something to the music world. Their debut album 'Q: Are...' (and its weak followup) aren't even mentioned in the docu, although it was produced by Brian Eno, and sound engineered by German Krautrock Meister Conny Plank. And it was "Recorded By" a real, American pioneer, Patrick Gleeson, a synth builder and player born in 1934. I remember buying his 1977 Star Wars album Patrick Gleeson - Patrick Gleeson's Star Wars on "the world's largest synthesizer" (I don't think he'd seen Tangerine Dream's stuff yet...), before even watching the first movie in 1978 (there weren't enough film copies in the world in 1977, and also I live in a dump, hence the delay...).

10 juillet 2021
man there is a lot of non album albums listed under "albums". what a mess.
Voir les 5 réponses

22 novembre 2019
There's a great video of 'Secret Agent Man' from around 1975/6. it has a brilliant clip during the 'guitar solo' where the guitarist has two regular guitars gaffer taped together into a hilarious parody of the double neck hyperbole type shit the old dinosaurs like Zeppelin were touting. That's how good Devo were, their stage act was super slick and fast. American acts of this period like Ubu and Suicide and even Sparks have stood the test of time. Alongside them Brit new wavers (hate this term) seem lame....we had to wait for The KLF to have some genuine quality British art pop anarchy.
Voir les 3 réponses

3 juin 2017
Was already into Ramones/Pistols, etc. when I saw Devo on Sat.NightLive in '78. It made most existing NewWave/Punk look like the Stones or something. They seemed to come from another planet! Their first 3 albums are essential. A truly unique and original band with very few influences, which can't be said about many (great) bands.

20 novembre 2016
No comments so far? Highly influential band here. They combined great music with an equally great image. Check out the Hardcore comps plus the early stuff (1977-1981). Some of their peers include Pere Ubu (also from O-Hi-O!), The Residents and Suicide. Def. one of the best bands :)