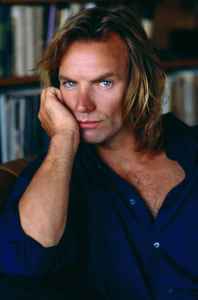 Vrai nom:
Gordon Matthew Thomas Sumner
Profil:
Musician (bassist), composer, singer-songwriter, actor, author, and activist Sting was born in Wallsend, Northumberland, England 2 October 1951, before moving to London in 1977 to form The Police with Stewart Copeland and Andy Summers. The band released five studio albums, earned six Grammy Awards and two Brits, and was inducted into The Rock and Roll Hall of Fame in 2003.
One of the early bands Sumner played with was The Phoenix Jazzmen. He once performed wearing a black and yellow jersey with hooped stripes that bandleader Gordon Solomon had noted made him look like a bumblebee; thus Sumner became "Sting". He uses Sting almost exclusively, except on official documents. In a press conference, he once jokingly stated that even his children call him Sting.
As one of the world’s most distinctive solo artists, Sting has received an additional 11 Grammy Awards, two Brits, a Golden Globe, an Emmy, four Oscar nominations (most recently for “The Empty Chair” from JIM: The James Foley Story), a TONY nomination, Billboard Magazine’s Century Award, and MusiCares 2004 Person of the Year. In 2002, he received the Ivor Novello Award for Lifetime Achievement from the British Academy of Songwriters, Composers and Authors and was also inducted into the Songwriters Hall of Fame. In 2003, Sting received a CBE from Elizabeth II at Buckingham Palace for services to music. In December 2014 he received the Kennedy Center Honors, and most recently was given The American Music Award of Merit. Throughout his enduring career, he has sold close to 100 million albums from his combined work with The Police and as a solo artist.
Sting’s support for human rights organizations such as the Rainforest Fund, Amnesty International and Live Aid mirrors his art in its universal outreach. Along with wife Trudie Styler, Sting founded the Rainforest Fund in 1989 to protect both the world’s rainforests and the indigenous people living there. Together they have held 17 benefit concerts to raise funds and awareness for our planet’s endangered resources.
Received the Polar Music Prize 2017.
In 2019, Sting was honoured at the BMI Pop Awards for his enduring hit single “Every Breath You Take,” which has become the most performed song, with 15 million radio plays, from BMI’s catalog of over 14 million musical works.
Sting married actress Frances Tomelty from Northern Ireland, on 1 May 1976. Before they divorced in 1984, they had two children: Joseph ("Joe Sumner") (born 23 November 1976) and Fuchsia Katherine ("Kate Sumner", born 17 April 1982). In 1982, after the birth of his second child, he separated from Tomelty and began living with actress and film producer Trudie Styler. The couple married at Camden Register Office on 20 August 1992. Sting and Styler have four children: Brigitte Michael Michael Sumner ("Mickey", born 19 January 1984), Jake Sumner (24 May 1985), Eliot Pauline Eliot Sumner (nicknamed "Coco", 30 July 1990), and Giacomo Luke (17 December 1995).
Sites:
Sting.com, Facebook, Twitter, Instagram.com, YouTube, TikTok.com, Wikipedia, equipboard.com, musicianbio.org, musicianguide.com, biography.com, famousbirthdays.com, geni.com, astro.com
Alias:
Gordon Sumner
Variantes :
Tout Voir | Sting
Siting (Dub 94), Sting (The Police), Stings, Stiug, Summer Gorden, Стинг, סטינג, スティング, 史汀, 斯汀, 스팅의

26 avril 2021
I totally agree with the previous comment regarding this discography. Is there something that can be done?

4 avril 2021
Sorry, another totally messed up discography in my humble opinion...