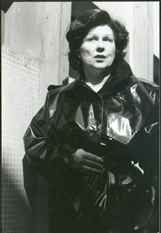 Profil:
Daughter of Acrato Llull and Pilar Grangel, anarchist teachers defending the rationalist school, Violeta Ferrer grew up in the Spain of libertarian dreams and actions. Her first contacts with poetry are passionate, she likes to say poems. Then came the days of 1936 and their revolution, at the same time waging war against the fascists and inventing a new world. It is the revenge of the gypsies on the Civil Guard. But Lorca is executed by the fascists and Buenaventura Durruti is killed during the siege of Madrid. At the latter's funeral, she carried a standard bearing her effigy. Then it was the procession of betrayals, complacency and abandonment that threw Spain into the hands of the fascists. The Civil Guard completes the gypsies. Violeta Ferrer arrived in early 1938 with a colony of children in one of these camps for women and children in the south of France. In this displaced and bruised Spain, she passionately tells the poetry of anarchist authors as well as that of Federico Garcia Lorca, which became popular thanks to the "Unfaithful Bride".

1945, she goes to Paris and takes part in numerous galas for Spanish refugees or former militiamen from the anarchist columns who return from the camps in Germany. Federico Garcia Lorca is the poet who almost unknowingly links her to Spain from her heart. Violeta Ferrer says her poems in all circumstances as before Federica Montseny for example, in meetings of the CNT in exile where others like Georges Brassens or Léo Ferré are also making their debut. She enrolled in the Cours Charles Dullin where she met Marcel Marceau, Roger Vadim and Charles Denner. She wishes to become an actress but it is always the poetry of Lorca that inhabits her deep down and the flamenco dance that she assiduously practices. She married the musician Pepe Nuñez, a former member of the POUM who was also a refugee. She dances with Niño de Cadiz, frequents Carmen Amaya, Pablo Casals. In the fifties, she recorded several discs of poems by Lorca produced by André Clergeat for the brand Pacific accompanied by guitarist Paco Juanas. She leaves Paris for New York to join Laura Toledo's troupe. They perform in Spanish cabarets which are next to those where the new jazz heroes play. The small New York Spanish community, of which the guitarist Sabicas is a member, is trying to set up a small space in Spain with deep vocals. Lorca is still the center of this life. She returned to France following family problems and decided in 1963 to leave the scene except for occasional performances for her friends Louis Lecoin and May Picqueray. This Spain in exile is too painful. Like many refugees from this betrayed, scorned, forgotten Spain, she seeks to distance herself, to integrate, to resign herself ...

1980, Federico Garcia Lorca "recalls" it. These long years can do nothing: Lorca is stronger, deep song is stronger, libertarian dreams are stronger! She performs at the Chantenay-Villedieu festival with François Tusques and records again, but this time with jazz musicians whose freedom she loves. François Tusques, Raymond Boni, André Jaume, Tony Coe, Jacques Di Donato will be on these trips. We find them, attentive, in the two discs that Violeta Ferrer devotes to the Andalusian poet. She discovers Picasso’s text, The Burial of the Count of Orgaz, which she says with a score composed by Tony Coe. More than the decisive artist for this century, it is the resolutely Andalusian aspect that works with the painter. She then performed with other musicians like Daunik Lazro, Mike Cooper or Evan Parker and participated in the disc Buenaventura Durruti. We also see her from time to time in the theater or the cinema with Jean-Pierre Mocky, Jean Marboeuf or Yves Caumon (The beauty of the world). She plays with Jean-Luc Godard in Praise of Love. She is one of the founding members of the Los Incontrolados group with which she says the Testament of an uncontrolled iron column.

In 2008, she performed at the Minnesota festival on the Seine in St Paul-Minnesota with Raymond Boni, whom she occasionally encountered during an evening entitled An evening with Federico Garcia Lorca (then the guitarist will engrave for Fou records a series of poems). On May 28, 2009, at the Ateliers Varan in Paris during a tribute to Abel Paz (Diego Camacho) biographer of Durruti, she said for the first time according to the wish expressed by the latter "The song of the pirate" by José de Espronceda. In 2010 we find her at the Dunois theater in duet with Sylvain Kassap during the evening of 30 years of nato. The same year, she participated in Tony Hymas' De l'Origine du monde where, alongside Nathalie Richard, she cited Gustave Courbet.