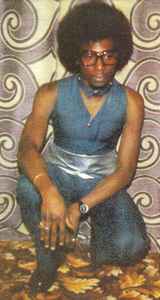 Vrai nom:
Kenneth Sumter
Profil:
Sumy (from 'Surinam Baby', a nickname given to him by his friends) was born August 1957 in Paramaribo, Surinam. Initially playing on selfmade instruments as a hobby, Sumy started his music career in 1979 with buying real instruments (a Hammond organ, a Rhodes piano and a PPG synthesizer), writing, recording and releasing his first single on his own independent label Sumy Records and performing with his band 'The Freaky Thangs'. Thanks to radio DJ Theo Stokkink the single picked up airplay. To get a better distribution of music he got a license deal at Philips Records, Hilversum for his next singles.