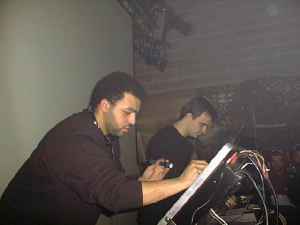 Profil:
French Hardcore Techno duo. The early Dead-End records were well received but with the release of 'Neurophonie' in 1999 Micropoint shot to fame and sold literally thousands of copies through Uncivilized World. Up until this time full length hardcore CD's with a continuous mix of an artists own material were virtually non-existent. They released 'Anesthesie International' shortly after which was also well received. Around 2001 Micropoint suffered breaches in contract with Uncivilized World for releasing material on another label and both Radium and Al Core went their separate ways. In 2007 Micropoint was reestablished.
Sites:
audiogenic.fr, Facebook, MySpace, Wikipedia
Alias:
Maxitrait
Membres:
Daniel Técoult, Denis Cohen-Scali

Best micropoint releases are: beast 3, dead end 2 and 6.
#Beast 3 is well known by hartek djs for the traxx hardbreak overmixed in late 90 but a true hardcore dj prefer triceratops or armor battle.

#Dead 6 is very very good: innovative, versatile and loud, nice in any mix

#Dirty vinyl is best in the neurotoxic version, but too bad the accelaration of bpm at the end (i hate this kind of trax).

7 février 2008
Micropoint's early work on labels like Beast and Dead End still stands today as some of the best hardcore techno/speedcore around.

Tracks like E-Man, Noise Gate & Armor Battle still sound crisp as lettuce 12 years on. A lot of hardcore techno from 1996 sounds embarrasingly dated these days and obviously production has moved on a lot since then but these Micropoint tracks still sound very well made, with meaty kicks, snappy percussion and great use of sounds throughout.

Their early tracks can easily be slotted into sets of new hardcore, and when the tracks are this well executed it would be a shame to lose them to history forever. Viva la Micropoint!
Répondre Me notifier 5 Helpful