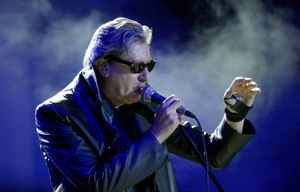 His first single came out at the age of 19, in 1966, was a flop. Then he became arranger for the major RCA and worked with the french singer Dick Rivers.
He met the producer Andy Scott and the lyricist Boris Bergman in 1977. His first LP with this duet was a flop, but Bashung did go on with this team.
In 1980, he landed his first hit with the single "Gaby" and the success began.
He did collaborate with a lot of different musicians and explored two main ways in music : one experimental, mostly during the eighties, and the second, more rock and roll roots oriented.
But the hallmark of genius with Bashung lies in the lyrics of his songs : a surreal cascade built on plays on words, that creates a full personal alchemy.
Sites:
Wikipedia
Alias:
David Bergen, Hendrick Darmen, Monkey Bizness (2)
Dans les groupes:
The Rock Band Revival
Variantes :
Tout Voir | Alain Bashung
A Bashung, A. Bachung, A. Baschung, A. Bashung, Alain Baschung, Bachung, Baschung, Bashung